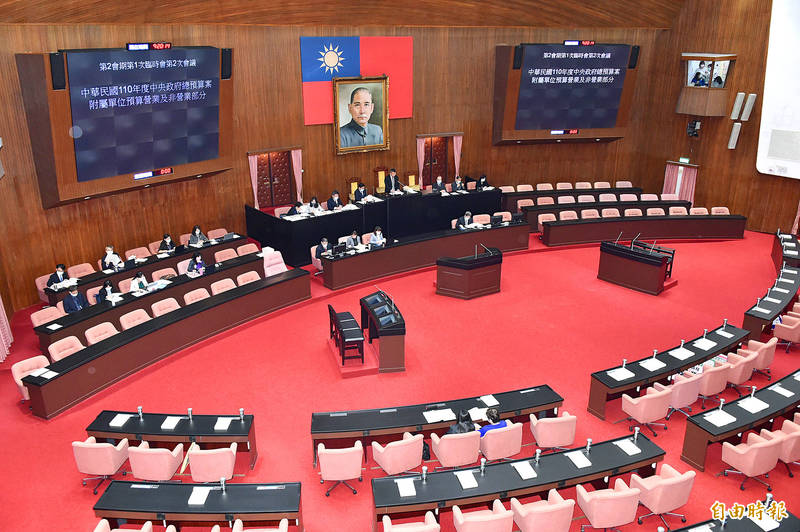 The legislative chamber at the Legislative Yuan in Taipei is pictured on Wednesday. Photo: Tu Chien-jung, Taipei Times

The Chinese Nationalist Party （KMT） caucus on Thursday and yesterday proposed freezing part of the entertainment expenses for Taiwan’s envoys to the US and the Czech Republic, sparking criticism.

The Legislative Yuan is reviewing the Executive Yuan’s budget bills, with 3,662 proposals — including 2,855 made by the KMT caucus — awaiting cross-party negotiations before the provisional session closes next week.

The KMT caucus proposed freezing 30 percent of Representative to the US Hsiao Bi-khim’s （蕭美琴） entertainment budget, saying that the proposal was in response to her alleged claim that the US refused to sell smart mines to Taiwan.

Hsiao last year denied making the claim, saying that she only discussed with the US how the mines could deter assaults, while the KMT said she damaged Taiwan-US trust.

Her total entertainment budget is kept confidential, but the KMT proposal would require her to report on her expenses to the legislature, said Shen Chien-yi （沈建億）, director of the caucus’ policy coordination section.

Many online comments criticized the party for the proposal after Hsiao was formally invited to US President Joe Biden’s inauguration ceremony, the first such invitation since Washington cut ties with Taipei in 1979.

Entertainment expenses are the “bullets” of overseas diplomats, and are not just spent on wine and steak, he wrote.

Taipei-Prague relations improved greatly last year, especially after Vystrcil led an 89-member delegation to Taiwan and spoke at the legislature.

It is not unusual for lawmakers to freeze budget bills until officials clarify their use, KMT Chairman Johnny Chiang （江啟臣） said.

President Tsai Ing-wen （蔡英文） urged support for diplomats, although she did not directly address the budget freeze issue.

“When diplomats are grasping every opportunity to speak on behalf of Taiwan, people at home should remain united and assist each other,” she said.

That way, Taiwan can surely overcome many challenges and keep contributing to the world, she said.