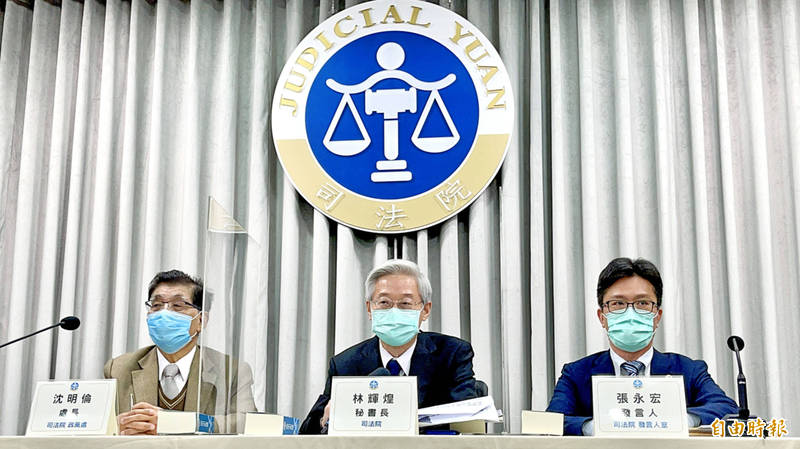 ‘ROTTEN’ SYSTEM: Judicial reform organizations said that the scandal involving more than 200 officials had severely eroded the public’s faith and trust in the judicial system

Twenty Supreme Court and High Court judges and senior officials, along with 20 prosecutors and judicial investigators, were found to have engaged in illegal activities such as bribe-taking, abuse of authority and conflict of interest, according to a Judicial Yuan report released yesterday.

The report recommended disciplinary measures and punishment against the 40 officials, including for judges presiding over nine cases involving Weng starting in the late 1990s, for which he received favorable rulings.

According to the report, Shih, who was president of the High Court, became a close friend of Weng when litigation involving him began in 1997.

Through Shih, Weng was introduced to more than 200 judges, prosecutors and police officials through banquets and personal visits, the report said.

The officials were alleged to have received bribes and lavish gifts, including company stock, in exchange for using their influence to aid Weng.

The Control Yuan in August last year began impeachment proceedings against Shih over alleged contraventions of the Judges Act （法官法） and suspicion of failing to avoid conflicts of interest.

In presenting the findings at a news conference in Taipei, Judicial Yuan Secretary-General Lin Hui-huang （林輝煌） said that the 20 judges involved had committed serious misconduct, and would face punishment to be determined by its disciplinary committee.

Seven of the judges found to have been most involved in abusing their authority face further investigation from the Control Yuan for possible impeachment, he said.

Some officials would be dismissed or transferred from their offices, with the possibility of losing their pension, as would retired officials implicated in the report, Lin said.

Some could evade punishment, as the allegations involving some officials are older than 10 years, past the statute of limitations on certain breaches under the Judges Act （法官法）, he added.

Minister of Justice Tsai Ching-hsiang （蔡清祥） told a separate news conference in Taipei yesterday that 11 former head prosecutors, and nine officials and investigators at the Ministry of Justice Investigation Bureau were involved in the case, some of whom allegedly attended Weng’s banquets more than five times, while others allegedly purchased stocks based on insider information from Weng.

They would be punished as part of internal administrative procedures, Tsai said.

The foundation called on lawmakers to amend the act to include a mechanism for evaluating judges and scrutinizing judicial officials.

“This scandal has shown that our justice system is rotten to the core,” Lin said. “Any further talks about the need for reform are useless, because people do not believe that judicial reform has made any progress.”

Lin and other judicial reform proponents said that the report was only halfway finished.

They urged the Control Yuan to conduct a more thorough probe, by requisitioning all materials pertaining to the case, along with Weng’s 27 notebooks allegedly recording details of meetings, banquets, gifts and insider trading activities.

“This is necessary to find out if these judges have interfered in other court cases where they had a conflict of interest or received other undue financial benefits,” Lin said.

He said that Premier Su Tseng-chang （蘇貞昌） should oversee the investigation, since high-ranking police officials were allegedly involved and had refused to cooperate with the Control Yuan’s probe.