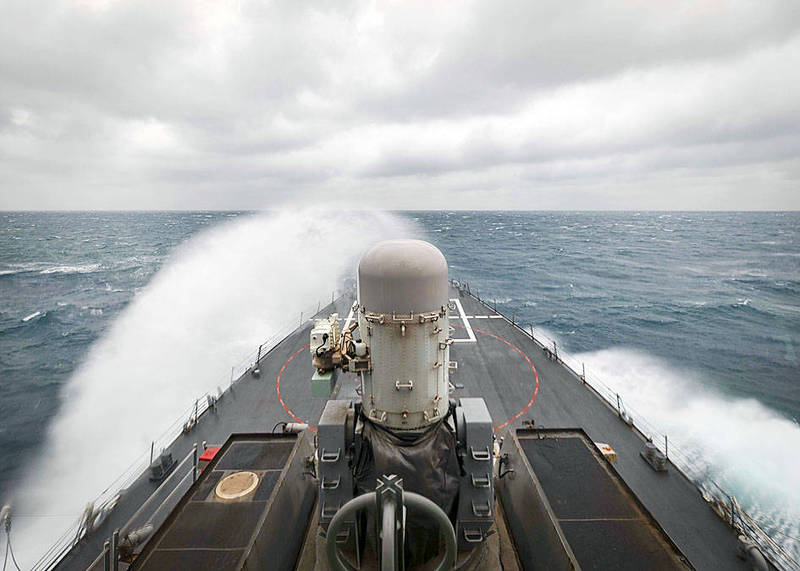 In a photo provided by the US Navy, the guided-missile destroyer the USS John S. McCain conducts routine operations in the Taiwan Strait on Dec. 30 last year. Photo: AP

‘HIGH IMPACT’: The potential for a conflict over Taiwan was raised from ‘Tier 2’ in previous years, joining the ranks of potential US disputes with Iran and North Korea

The New York-based Council on Foreign Relations （CFR） on Thursday listed a possible conflict between the US and China over Taiwan as a top-tier concern for the first time in its annual Preventive Priorities Survey.

The report assessed the likelihood and effects of 30 potential conflicts that could break out over the next year based on responses from 550 US government officials, foreign policy experts and academics.

Those conflicts are classified into one of three tiers, and the possibility of “intensifying political and economic pressure from China against Taiwan, leading to a severe crisis with the United States,” was classified as a “Tier 1” risk for the first time.

A US-China conflict over Taiwan was listed as a “Tier 2” risk in 2019 and last year, but was moved up based on its potentially “high impact” on US interests and the moderate likelihood of it occurring, the report said.

A high impact on US interests refers to a contingency that directly threatens the US, a defense treaty ally or a vital strategic interest, and is thus likely to trigger a major US military response, based on the council’s definitions.

A “moderate” likelihood means that there is some chance of an event happening.

By contrast, the possibility of “an armed confrontation in the South China Sea involving China and the United States over freedom of navigation and disputed territorial claims” was downgraded from a Tier 1 to a Tier 2 risk, as it was judged to have a low likelihood of occurring in the coming year.

In addition to a crisis over Taiwan, the council also ranked as Tier 1 contingencies the heightening of military tensions with North Korea over its nuclear program, and an armed confrontation between Iran and the US or one of its allies over Iran’s involvement in regional conflicts and support of militant proxy groups.

Other Tier 1 risks included political instability in Afghanistan, Syria and Venezuela, Russian interference or intimidation against a NATO member, and the possibility of a major cyberattack or terrorist attack on the US.

Paul Stares, director of the council’s Center for Preventive Action, said in the report that the survey is intended to calculate the likelihood of specific contingencies based on the presence of known risk factors.

This ensures that “precautionary measures can be directed toward those [risks] that appear most threatening to lessen the chance that they materialize and reduce the harmful impact if they do,” he said.

The survey only included contingencies in which the US military could plausibly be employed, and therefore excluded other global risks, such as climate change, economic or health-related events, and natural disasters.

It also excluded the risk of domestic unrest or conflict within the US.