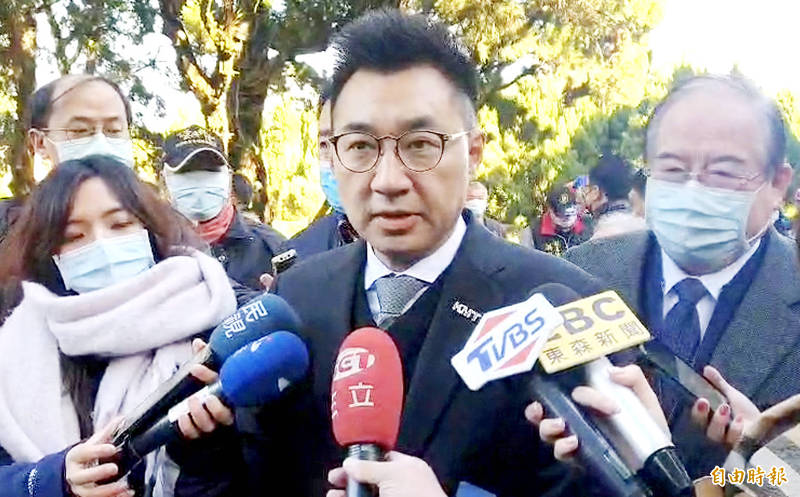 PRAGMATIC RELATIONS: It is understandable for the US Department of State to give priority to domestic stability, the KMT chairman said, calling for improved exchanges

Chinese Nationalist Party （KMT） Chairman Johnny Chiang （江啟臣） yesterday said that the cancelation of US Ambassador to the UN Kelly Craft’s visit to Taiwan was understandable, while KMT spokeswoman Lu Chen-wei （盧宸緯） accused the Democratic Progressive Party （DPP） of using the matter for political gain, after DPP Legislator Chen Ting-fei （陳亭妃） said that the KMT should bear “considerable responsibility” for the cancelation.

Craft had been scheduled to arrive in Taipei yesterday for a three-day visit during which she would “reinforce the US government’s strong and ongoing support for Taiwan’s international space.”

However, the trip was scrapped as the US Department of State canceled “all planned travel this week” as it engages in transition efforts with US president-elect Joe Biden’s team ahead of his inauguration on Wednesday next week.

“We are fully committed to the completion of a smooth and orderly transition process to be finalized over the next eight days,” the department said in a statement on Tuesday.

US Secretary of State Mike Pompeo’s planned trip to Europe was also canceled, the department said.

It would be understandable for the department to cancel all travel to prioritize political stability at home, Chiang told reporters at an event in Taoyuan.

Chiang said he hoped for continued and improved exchanges, interactions and cooperation between Taiwan and the US, and urged President Tsai Ing-wen’s （蔡英文） administration to put more effort into ensuring the stable, sustainable and substantial development of bilateral relations after Biden takes office.

The KMT has always advocated for pragmatic, substantive and sustainable relations between Taiwan and the US, he said.

Chen earlier yesterday said that the KMT should bear “considerable responsibility” for the cancelation of Craft’s trip.

The KMT had subjected the visit to “endless criticism” before it was due to begin, she said.

Lu said in a statement on Facebook that the department had said the cancelations were aimed to ensure a smooth handover of power.

Lu said that the DPP was using US domestic affairs for “political manipulation” and “shifting the focus” to the KMT.

She asked whether the KMT was also to blame for the cancelation of Pompeo’s trip to Belgium.

The US government has twice in the past three months called off trips to Taiwan by important officials, with the other being the cancelation in November last year of US Environmental Protection Agency Administrator Andrew Wheeler’s planned visit, Lu said.

The KMT urges the Tsai administration to find a balance between guaranteeing the interests of Taiwan and promoting Taiwan-US relations, she said.

Although the cancelation of Craft’s trip has been confirmed, the KMT welcomes visits aimed at promoting bilateral exchanges and common interests by US officials who have left office, she added.