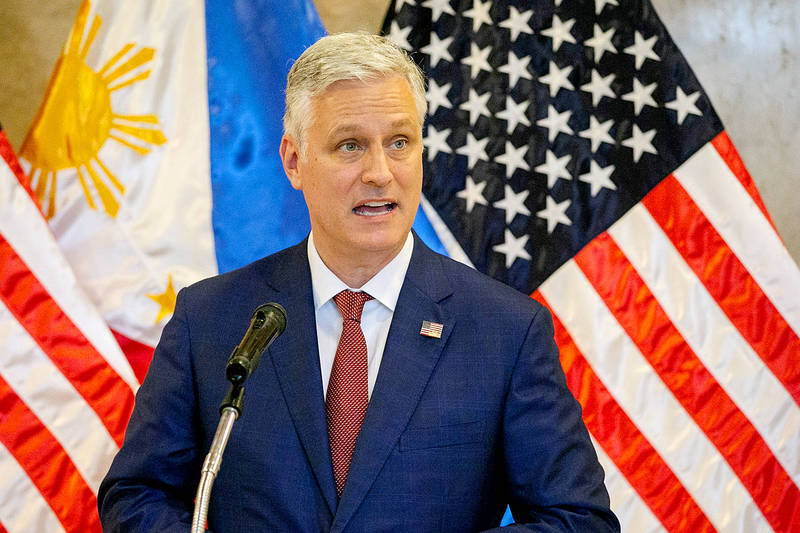 ‘ASSERTIVE STEPS’: The report says that the US should enable Taiwan to construct asymmetric defense capabilities that would allow it to engage China on its own terms

By Jonathan Chin / Staff writer, with Bloomberg and CNA

US President Donald Trump’s administration on Tuesday declassified a report that casts the defense of Taiwan as critical to the Indo-Pacific strategy of checking China’s ascent, Bloomberg reported yesterday.

“US Strategic Framework for the Indo-Pacific” has governed the US’ strategic response to China since Trump approved it in February 2018, Bloomberg reported, citing a statement by US National Security Adviser Robert O’Brien.

“Beijing is increasingly pressuring Indo-Pacific nations to subordinate their freedom and sovereignty to a ‘common destiny’ envisioned by the Chinese Communist Party [CCP],” O’Brien was cited as saying.

The report assumes that China would “take increasingly assertive steps to compel unification with Taiwan,” Bloomberg quoted the document as saying.

China’s presumptive aim is to “dissolve US alliances and partnerships in the region” before moving to “exploit vacuums and opportunities created by these diminished bonds,” the report says.

It advises the US to devise and implement a defense strategy that is capable of denying China sustained air and sea dominance inside the first island chain in a war, and defending Taiwan and other first nations on the island chain.

Part of that defense strategy would be to enable “Taiwan to develop an asymmetric defense strategy and capabilities” that would allow the nation to “engage China on its own terms,” the report says.

The report highlights China’s “predatory economic practices” that “freeze out” foreign competition, undermining US competitiveness and furthering the CCP’s ambitions to “dominate the 21st-century economy.”

Beijing is also expected to seek dominion over “cutting-edge technologies, including artificial intelligence and bio-genetics, and to harness them in the service of authoritarianism,” the report says.

The US should contend with China’s economic practices by building an international consensus that Beijing’s industrial and unfair trade politics are detrimental to the global trading system, it says.

Chinese Ministry of Foreign Affairs spokesman Zhao Lijian （趙立堅） yesterday said that the strategic framework for the Indo-Pacific contradicts the “solemn promises of the US” regarding its policy toward Taiwan.

“The US should turn away from an erroneous and dangerous path that could jeopardize peace and stability in the Taiwan Strait, and harm China-US relations,” he said.

Zhao made the remarks at a routine news conference and reiterated Beijing’s “one China” principle that “Taiwan is an inseparable sovereign territory of China.”

“The content of the documents betrays the vile intentions of the US Indo-Pacific strategy to suppress China and to damage regional peace and stability,” he said, calling the document “a strategy to maintain hegemony.”

“China has the determination, confidence and ability to defeat external forces’ attempts at interference or Taiwanese independence conspiracies,” he said.

“Any ploy to check China with Taiwan is futile,” Zhao added.

The document’s allegations that China is ratcheting up the pressure on neighboring countries are “malicious distortions and lies,” he said.