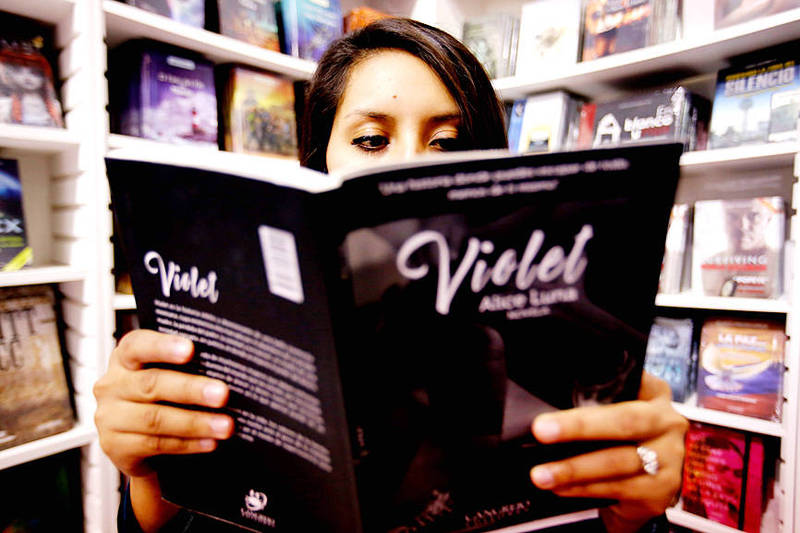 A woman reads a book at the Guadalajara International Book Fair in Guadalajara, Mexico, on Dec. 5 last year. Photo: AFP

UNTAPPED READERSHIP: TAICCA also produced a video introducing Taiwanese publishing to the Spanish-language market and created commercials for some books

Better known as the FIL, which is short for La Feria Internacional del Libro de Guadalajara, the book fair is the most important event in the Spanish-language publishing industry, and second in scale only to the Frankfurt Book Fair in Germany, the agency said on Saturday.

Due to the COVID-19 pandemic, this year’s FIL, the 34th edition, was turned into an online event, it said.

The FIL opened on Saturday and is to run until Monday next week, the agency said.

The agency said that it partnered with the Taipei Book Fair Foundation to help 54 publishers present information on 176 titles in the FIL’s official catalog.

To improve the promotion of Taiwanese content in the Spanish-language publishing market, the agency also set up a virtual Taiwan Pavilion in Spanish （taiwan-filguadalajara2020.taicca.tw）, produced a video introducing Taiwanese publishing and created a series of animated commercials for selected books, it said.

“As online editions of exhibitions become the norm, TAICCA has continuously promoted Taiwan’s publishing works to every corner of the world,” it said.

The theme of the virtual pavilion is “Lo pequeno es grande,” or “Small is Big,” which was also the theme of Taiwan’s online participation at the Frankfurt Book Fair last month, the agency said.

TAICCA said it has observed that the Spanish-language publishing market favors works with diverse graphic styles, and thus recommended a list of picture books and graphic novels on topics ranging from child development to dreams.

An online catalog （publication.taicca.tw/book/18） of all the titles presented at the FIL — including open-call selections and winners of the Golden Tripod Awards, the Golden Comic Awards and the Golden Butterfly Awards — is available in the virtual pavilion, it said.

The video, which is available on the agency’s YouTube channel, features footage from major publishing industry events in Taiwan, including the Taipei International Book Exhibition, the Wordwave Festival and the Golden Comic Awards ceremony, it said.

The animated commercials, which were made in collaboration with director Gooshun Wang （王谷神）, are each 10 to 15 seconds long and aim to attract international buyers and expand the visibility of Taiwanese content overseas, it said.

The FIL has grown rapidly in the past five years, the agency said, adding that the number of participating publishers has grown from about 1,900 to 2,417, while attendance has increased from 720,000 to nearly 850,000.

“There is a large Spanish readership worldwide, and the FIL is one of the top Spanish publishing markets,” agency President Lolita Hu （胡晴舫） said.

The agency looks forward to improving understanding of Taiwanese culture within the Spanish-language publishing industry, and showcasing Taiwan’s diverse publishing landscape, she said.

Once the pandemic subsides, the agency hopes to send Taiwanese publishers to participate in the FIL in person, the agency said.