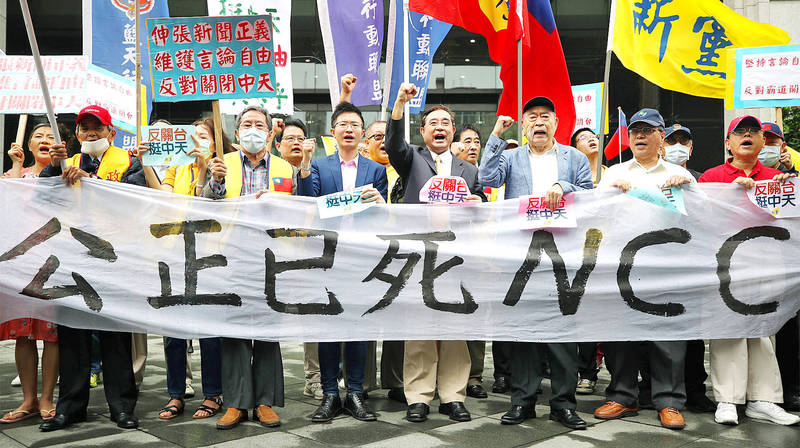 ‘BACKED BY ENEMY’: CtiTV is one of the few channels promoting unification, the New Party chairman said, while pro-Taiwan groups called it a propaganda outlet

Pan-blue camp supporters yesterday lodged a protest at the National Communications Commission （NCC） against what they say is a possible move by the government to shut down CtiTV News, adding that politics should not interfere with freedom of the press.

Protesters included representatives from the New Party, the Blue Sky Action Alliance, the 333 Political Party Alliance and other pan-blue groups.

“We stand here today because CtiTV News is one of the few media outlets in Taiwan that is still willing to give groups supporting unification with China a voice. If the news channel is gone, there would only be one voice in the nation,” New Party Chairman Wu Cherng-dean （吳成典） told reporters.

“Freedom of the press in a democratic country cannot be compromised. The government can use the law to handle any technical infraction committed by the news channel, but it cannot use its political judgement to determine if the channel should or should not be closed. That decision should be made by the market,” he added.

This shows that the NCC is no longer an independent agency, Lee said.

“The commission is an independent collegial administrative organization and we hope that the public would leave us room to handle CtiTV News’ license renewal application independently,” he said.

Meanwhile, pro-Taiwan activist groups called on NCC members to conduct a rigorous review and not act leniently against CtiTV News when having verified serious breaches and illegal conduct by the channel.

In light of the findings, the channel’s operating license must be withdrawn, in accordance with the law, they said.

“Such freedoms in a democracy cannot be expanded to be boundless. Media outlets must have social responsibility, as they use public airwaves, and must not distort facts or fabricate news reports,” Chang said.

“The real issue is about national security, as CTi News is colluding with China to subvert Taiwan’s democracy through its pro-China agenda,” Chang added.

“The main focus must be on the Chinese money behind CtiTV News, which carries out Beijing’s propaganda and disinformation campaigns,” he added.

“China is still at war against us, as Beijing has been preparing for a military attack to invade and take over Taiwan, and to subjugate Taiwan’s democracy under its communist rule,” Li said.

“So how can Taiwan continue to permit CtiTV News to operate? It is backed by money from an enemy state to brainwash Taiwanese with its political propaganda and fake news,” he said.

“It is clear that Tsai, with his media outlets, is promoting the ‘one country, two systems’ concept for China to annex Taiwan. So the NCC cannot go soft this time and must make stringent reviews on the many breaches by CtiTV News, which should be considered as a Chinese media outlet,” he added.

In other news, the NCC said that Fox Sports must complete all required administrative procedures before cable operators can remove the three sports channels in the network from their channel lineups.

The sports network yesterday announced that it would cease its operations in Taiwan on Jan. 1.

Commission specialist Huang Jui-ti （黃睿迪） said that Fox must first file an application to cease operations in Taiwan based on the Satellite Broadcasting Act （衛星廣播電視法）.

Cable operators carrying the channels must also apply for a change in their channel lineups and make a public announcement by running a news ticker about it for at least five days before the channels are taken off the air, Huang said.

Consumers would be entitled to a refund if they do not wish to subscribe to a cable service without Fox Sports channels, the commission said, adding that cable operators must not charge subscribers for canceling their service contracts.