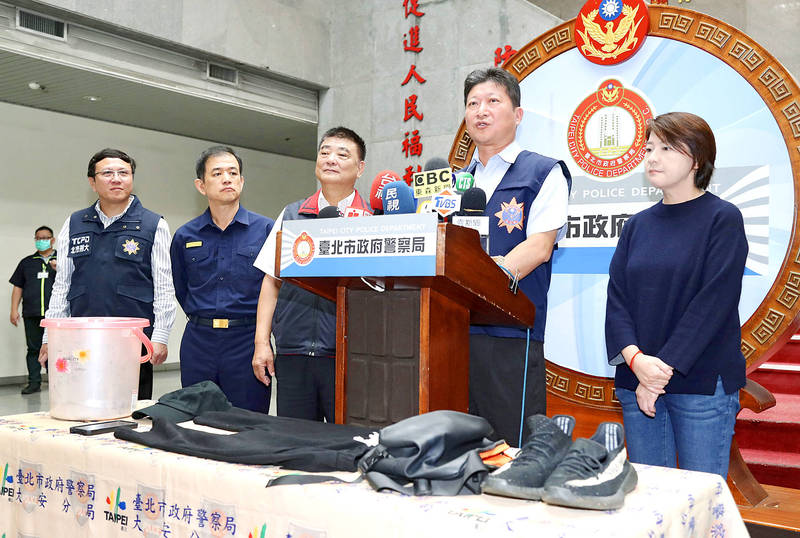 ‘MAJOR CRIMINAL CASE’: The lead prosecutor said that the case has priority given that Aegis has come to symbolize a haven for exiled Hong Kong activists

A man suspected of emptying a bucket of chicken feces at Aegis, a restaurant in Taipei known to support exiled Hong Kong democracy activists, and three suspected accomplices were yesterday apprehended by the authorities.

Prosecutors said that a man surnamed Mo （莫）, 27, was asked by three men — a man surnamed Chiang （江） and two brothers surnamed Lee （李） — to carry out feces attacks, with a payment of NT$15,000 for each one.

As of press time last night, Chiang and the Lee brothers were being questioned, prosectutors said, adding that a court had approved to keep Mo detained because he is a flight risk, could tamper with evidence and would likely commit similar offenses.

Prosectutors said that the investigation is focusing on whether the four men were affiliated with criminal gangs or political parties — although no ties have so far been uncovered — and their motive.

After the attack at Aegis at about noon on Friday, Taipei police began working around the clock reviewing security camera footage, which led them to apprehend Mo at his apartment in New Taipei’s Sijhih District （汐止） yesterday morning.

A task force has been formed to handle the case, headed by Prosecutor Liao Yen-chun （廖彥鈞） of the Taipei District Prosecutors’ Office.

Mo could be charged with assault, intimidation, public insult, property damage and related charges, as Aegis staff were doused with chicken feces — with a female manager experiencing eye inflammation as a result — and kitchen equipment was damaged, Liao said.

Prosecutors have prioritized the incident as a “major criminal case,” given what Aegis has come to symbolize, Liao added.

The restaurant has become a haven and even a place of employment for exiled activists and students from Hong Kong.

The attack is seen as “a brazen challenge” of the authorities, Liao said.

Since the restaurant opened in April, local police have increased patrols, but the attack was carried out in daytime, undaunted by nearby witnesses, he added.

At Mo’s residence, police said that they found a bucket with traces of feces, as well as a hat and running shoes like those seen in security camera footage.

Former Causeway Bay Books manager Lam Wing-kei （林榮基）, who before opening his bookstore in Taipei was doused in red paint by two men at a Taipei cafe in April, said that “pro-China forces” were certainly behind the Aegis attack.

“I urge the Taiwan government to impose more severe punishments, to deter these crimes, as right now the price to pay is very low,” he said.