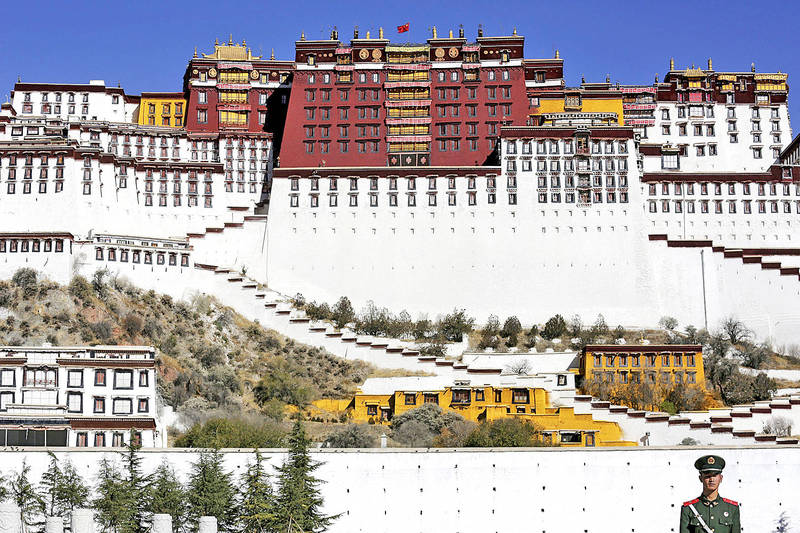 A paramilitary policeman stands guard in front of the Potala Palace in Lhasa, Tibet, on Nov. 17, 2015. Photo: Reuters

China is pushing growing numbers of Tibetan rural laborers off the land and into recently built military-style training centers where they are turned into factory workers, mirroring a program in Xinjiang that rights groups have branded coercive labor.

Beijing has set quotas for the mass transfer of rural laborers within Tibet and to other parts of China, according to more than 100 state media reports, policy documents from government bureaus in Tibet and procurement requests released between 2016 and this year and reviewed by Reuters.

The quota effort marks a rapid expansion of an initiative designed to provide loyal workers for Chinese industry.

A notice posted last month to the Web site of Tibet’s regional government said more than half a million people were trained as part of the project in the first seven months of this year — about 15 percent of the region’s population.

Of this total, almost 50,000 have been transferred into jobs within Tibet, and several thousand have been sent to other parts of China.

Many end up in low paid work, including textile manufacturing, construction and agriculture.

“This is now, in my opinion, the strongest, most clear and targeted attack on traditional Tibetan livelihoods that we have seen almost since the Cultural Revolution” of 1966 to 1976, said Adrian Zenz, an independent Tibet and Xinjiang researcher based in Minnesota, who compiled the core findings about the program.

These are detailed in a report released this week by the Jamestown Foundation, a Washington-based institute that focuses on policy issues of strategic importance to the US.

In a statement, the Chinese Ministry of Foreign Affairs strongly denied the involvement of forced labor, and said China is a country with rule of law and that workers are voluntary and properly compensated.

“What these people with ulterior motives are calling ‘forced labor’ simply does not exist. We hope the international community will distinguish right from wrong, respect facts, and not be fooled by lies,” it said.

Moving surplus rural labor into industry is a key part of China’s drive to boost the economy and reduce poverty, but in areas like Xinjiang and Tibet, with large ethnic populations and a history of unrest, rights groups say the programs include an outsized emphasis on ideological training.

They say the government quotas and military-style management suggest the transfers have coercive elements.

China seized control of Tibet after Chinese troops entered the region in 1950, and Tibet has since become one of the most restricted and sensitive areas in the country.

The Tibetan program is expanding as international pressure is growing over similar projects in Xinjiang, some of which have been linked to mass detention centers.

A UN report has estimated that about 1 million people in Xinjiang, mostly ethnic Uighurs, were detained in camps and subjected to ideological education.

China initially denied the existence of the camps, but has since said they are vocational and education centers, and that all the people have “graduated.”

Reuters was unable to ascertain the conditions of the transferred Tibetan workers. Foreign journalists are not permitted to enter the region, and other foreign citizens are only permitted on government-approved tours.

In recent years, Xinjiang and Tibet have been the target of harsh policies in pursuit of what Chinese authorities call “stability maintenance.”

These policies are broadly aimed at quelling dissent, unrest or separatism and include restricting the travel of ethnic citizens to other parts of China and abroad, and tightening control over religious activities.

While there has been some evidence of military-style training and labor transfers in Tibet in the past, this new, enlarged program represents the first on a mass scale and the first to openly set quotas for transfers outside the region.

State media described one such operation in villages near the Tibetan capital, Lhasa. Officials carried out more than 1,000 anti-separatism education sessions, according to the state media report, “allowing the people of all ethnic groups to feel the care and concern of the Party Central Committee,” referring to the Chinese Communist Party （CCP）.

The report said the sessions included songs, dances and sketches in “easy to understand language.” Such “education” work took place prior to the rollout of the wider transfers this year.

The model is similar to Xinjiang, and researchers say a key link between the two is the former Tibet CCP secretary Chen Quanguo （陳全國）, who took over the same post in Xinjiang in 2016 and spearheaded the development of Xinjiang’s camp system.

The Xinjiang government, where Chen remains CCP secretary, did not respond to a request for comment.

“In Tibet, he was doing a slightly lower level, under the radar, version of what was implemented in Xinjiang,” said Allen Carlson, an associate professor in Cornell University’s government department.

About 70 percent of Tibet’s population is classified as rural, according to 2018 figures from China’s National Bureau of Statistics.

This includes a large proportion of subsistence farmers, posing a challenge for China’s poverty alleviation program, which measures its success on levels of basic income.

China has pledged to eradicate rural poverty in the country by the end of this year.

“In order to cope with the increasing downward economic pressure on the employment income of rural workers, we will now increase the intensity of precision skills training ... and carry out organized and large-scale transfer of employment across provinces, regions and cities,” a working plan released by Tibet’s Human Resources and Social Security Department in July said.

Some of the policy documents and state media reports reviewed by reporters make reference to unspecified punishments for officials who fail to meet their quotas. One prefecture level implementation plan called for “strict reward and punishment measures” for officials.

As in Xinjiang, private intermediaries, such as agents and companies, that organize transfers can receive subsidies set at 500 yuan （US$74） for each laborer moved out of the region and 300 yuan for those placed within Tibet, according to regional and prefecture level notices.

Officials have previously said that labor transfer programs in other parts of China are voluntary, and many of the Tibetan government documents also mention mechanisms to ensure laborers’ rights, but they do not provide details.

Advocates, rights groups and researchers say it is unlikely laborers are able to decline work placements, though they acknowledge that some may be voluntary.

“These recent announcements dramatically and dangerously expand these programs, including ‘thought training’ with the government’s coordination, and represent a dangerous escalation,” said Matteo Mecacci, president of US-based International Campaign for Tibet.

The documents reviewed by reporters put a strong emphasis on ideological education to correct the “thinking concepts” of laborers.

“There is the assertion that minorities are low in discipline, that their minds must be changed, that they must be convinced to participate,” Zenz said.

One policy document, posted on the Web site of the Nagqu City government in Tibet’s east in December 2018, reveals early goals for the plan and sheds light on the approach.

It describes how officials visited villages to collect data on 57,800 laborers. Their aim was to tackle “can’t do, don’t want to do and don’t dare to do” attitudes toward work, the document says. It calls for unspecified measures to “effectively eliminate ‘lazy people.’”

A report released in January by the Tibetan arm of the Chinese People’s Political Consultative Conference describes internal discussions on strategies to tackle the “mental poverty” of rural laborers, including sending teams of officials into villages to carry out education and “guide the masses to create a happy life with their hardworking hands.”

The training emphasizes strict discipline, and participants are required to perform military drills and dress in uniforms.

Small-scale versions of similar military-style training initiatives have existed in the region for more than a decade, but construction of new facilities increased sharply in 2016, and recent policy documents call for more investment in such sites.

A review of satellite imagery and documents relating to more than a dozen facilities in different districts in Tibet shows that some are built near to or within existing vocational centers.

The policy documents describe a teaching program that combines skills education, legal education and “gratitude education,” designed to boost loyalty to the CCP.

James Leibold, professor at Australia’s La Trobe University who specializes in Tibet and Xinjiang, says there are different levels of military-style training, with some less restrictive than others, but that there is a focus on conformity.

“Tibetans are seen as lazy, backward, slow or dirty, and so what they want to do is to get them marching to the same beat... That’s a big part of this type of military-style education,” he said.

In eastern Tibet’s Chamdo district, where some of the earliest military-style training programs emerged, state media images from 2016 show laborers lining up in drill formation in military fatigues.

In images published by state media in July this year, waitresses in military clothing are seen training at a vocational facility in the same district.

In one image, banners hanging on the wall behind a row of graduates say the labor transfer project is overseen by the local Human Resources and Social Security Department.

The vocational skills learned by trainees include textiles, construction, agriculture and ethnic handicrafts.

A separate regional policy document says the goal is to “gradually realize the transition from ‘I must work’ to ‘I want to work.’”

Regional and prefecture level policy documents place an emphasis on training batches of workers for specific companies or projects. Rights groups say this on-demand approach increases the likelihood that the programs are coercive.

Workers transferred under the programs can be difficult to trace, particularly those sent to other parts of China.

In similar mass transfers of Uighur people from Xinjiang, workers were discovered in the supply chains of 83 global brands, according to a report by the Australian Strategic Policy Institute.

Researchers and rights groups say transfers from these regions pose a challenge because without access they can’t assess whether the practice constitutes forced labor, and transferred workers often work alongside non-transferred counterparts.

Tibetan state media reports in July say that this year some of the workers transferred outside of Tibet were sent to construction projects in Qinghai and Sichuan. Others transferred within Tibet were trained in textiles, security and agricultural production work.

Regional Tibetan government policy notices and prefecture implementation plans provide local government offices with quotas for this year, including for Tibetan workers sent to other parts of China.

Larger districts are expected to supply more workers to other areas of the country — 1,000 from Lhasa, 1,400 from Xigaze, and 800 from Shannan.

Reuters reviewed policy notices put out by Tibet and a dozen other provinces that have accepted Tibetan laborers. These documents reveal that workers are often moved in groups and stay in collective accommodation.

Local government documents inside Tibet and in three other provinces say workers remain in centralized accommodation after they are transferred, separated from other workers and under supervision.

One state media document, describing a transfer within the region, referred to it as a “point to point ‘nanny’ service.”

The Tibetan Human Resources and Social Security Department in July said that people are grouped into teams of 10 to 30. They travel with team leaders and are managed by “employment liaison services.”

The department said the groups are tightly managed, especially when moving outside Tibet, where the liaison officers are responsible for carrying out “further education activities and reducing homesickness complexes.”

It said the government is responsible for caring for “left-behind women, children and the elderly.”