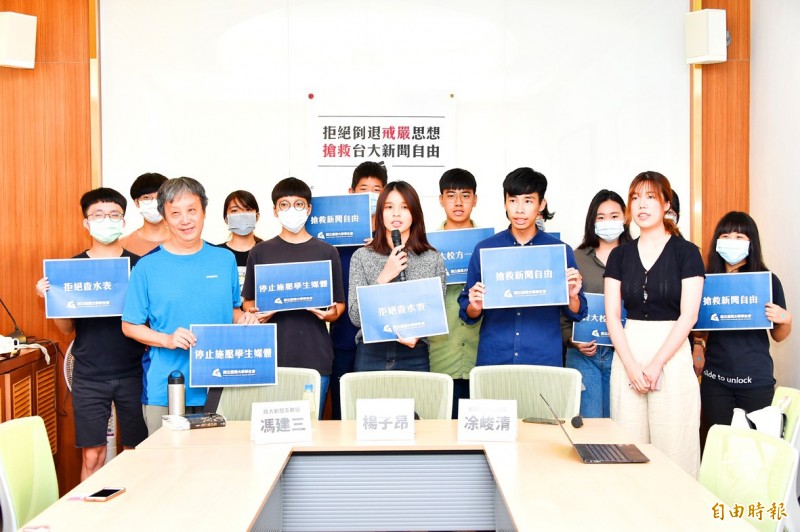 RULES WANTED: An NCCU professor said it remains to be seen whether NTU is behind the times or if the problem would be fixed by improved communication

Yang told a news conference at the Legislative Yuan in Taipei that a petition calling for student reporters to be allowed to attend one of the meetings on Oct. 24 was launched on Wednesday.

A student reporter who had been critical of NTU after a meeting last year had been called in by the university to “have a chat,” which was an attempt to force the student to alter their article, the association said.

NTU has been conservative about sharing information and it could even be said that it is resisting, as it has refused to allow livestreams of the meetings and has barred student reporters from post-meeting news conferences, Yang said.

Yang said that she did not understand what the university was afraid of and it should not rigorously control students’ efforts to understand how NTU makes decisions.

“Is the university dismissive of students, or is there something that would not stand up to public scrutiny?” she asked.

Yang called on NTU president Kuan Chung-ming （管中閔） to respond to the appeals and “shoulder the responsibility that NTU has as a university to educate its students.”

NTU must stop oppressing student journalism and not attempt to alter students’ reporting, the association said, adding that it should work with students to establish a clear set of rules, standards and procedures that would recognize student journalism while ensuring that student journalists are notified of events and retain the right to conduct interviews.

NTU is sidestepping the issue of it selectively overlooking student reporters and trying to isolate them, Yang said, referring to NTU on Wednesday saying that it had issued a notice on the matter.

“It might seem like the university is responding to us, but it is still controlling freedom of speech on campus,” she said.

NTU’s actions, as described by Yang, are surprising and it remains to be seen whether it is simply a matter of miscommunication or whether it is truly behind the times, Feng said.

NTU should endeavor to give students opportunities to conduct interviews, he said, adding that a system allowing unhindered reporting should be established.

NTU, as the alma mater of Taiwanese presidents since the Martial Law period is an important academic institute and should provide clear answers to students’ appeals, he said.