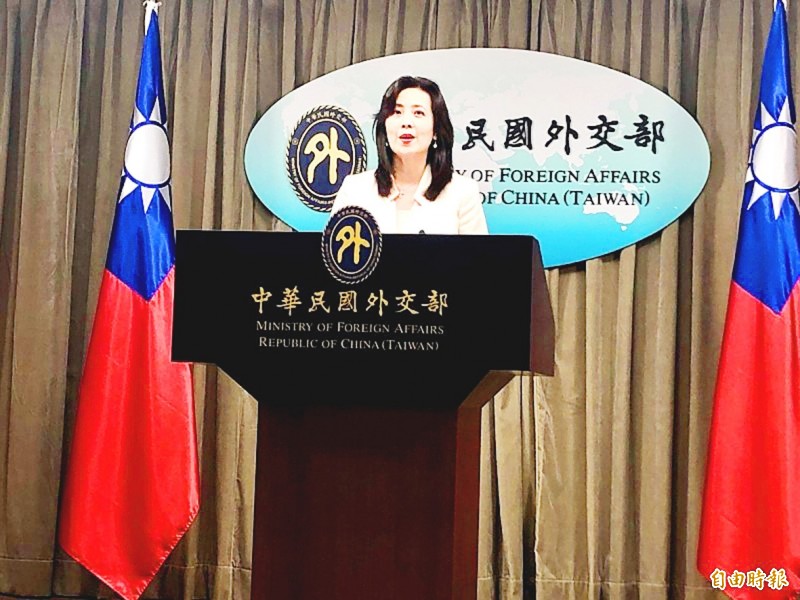 The Chinese government should tackle its internal problems before pointing fingers at others, given that it has become a “global troublemaker,” Ministry of Foreign Affairs （MOFA） spokeswoman Joanne Ou （歐江安） said yesterday, after Beijing criticized a planned visit to Taiwan by US Secretary of Health and Human Services Alex Azar.

Azar’s delegation is to arrive on Sunday, the Executive Yuan said yesterday.

After the US Department of Health and Human Services on Tuesday announced that Azar would lead a delegation to Taiwan “in the coming days,” Chinese Ministry of Foreign Affairs spokesman Wang Wenbin （汪文斌） said that Beijing had voiced its serious concerns about the trip to Washington and called on the US to stop any government-to-government interaction with Taiwan.

China’s Taiwan Affairs Office spokesman Ma Xiaoguang （馬曉光） accused the Democratic Progressive Party of scheming with the US for its own political interests, which were “dangerous and detrimental” to the common benefits of people across the Taiwan Strait.

Asked about those remarks, Ou told a briefing at the ministry in Taipei that Taiwan is a sovereignty nation and that China has no right to intervene in its interactions with the US or other like-minded countries.

Beijing should look at its own problems before it criticizes other countries, she said.

The Chinese government has become a global troublemaker, as its concealment of the initial COVID-19 cases led to a global pandemic that now has 18 million confirmed cases and 700,000 fatalities, she said.

China continues to provoke disputes with other nations, including Taiwan, Japan and India, while expanding its military establishments in the South China Sea, which not only sabotages the “status quo,” but causes regional tension, she said.

Internally, it continues to suppress the freedoms of its citizens in Hong Kong and Xinjiang, as well as the religious freedoms of Christians and Muslims, Ou said.

The Chinese government should listen to its people and stop making irresponsible comments on the global stage, she said.

US Secretary of State Mike Pompeo on Wednesday had also weighed in on Beijing’s response at a news conference in Washington.

US Cabinet members have traveled to Taiwan in the past, and Azar’s visit is “consistent with the policies of previous times,” Pompeo said.

“He’s going there with a deep and important purpose — we’re still in a global pandemic,” and Taiwan has had “some significant success” in its response to COVID-19, he said.

“We wanted [Taiwan] to be part of the conversations at the World Health Assembly. China prevented that from happening,” he said.

Pompeo said that Azar’s visit would focus on public health issues, including efforts to contain COVID-19 and “the opportunity for therapeutics and a vaccine.”

The Executive Yuan yesterday said that Azar would meet with President Tsai Ing-wen （蔡英文）, and visit MOFA, the Ministry of Health and Welfare and the “National Face Mask Team” that has helped the government produce masks.

He is also scheduled to meet with health and medical experts to discuss COVID-19 control and prevention measures, Cabinet spokesman Ting Yi-ming （丁怡銘） said, although he did not say how long the US delegation’s visit would be.

All members of Azar’s delegation would be required to wear masks when meeting with others, in accordance with the government’s COVID-19 prevention guidelines, Centers for Disease Control Deputy Director-General Chuang Jen-hsiang （莊人祥） told reporters.