《TAIPEI TIMES》 No need to test all arrivals for COVID-19, CECC says 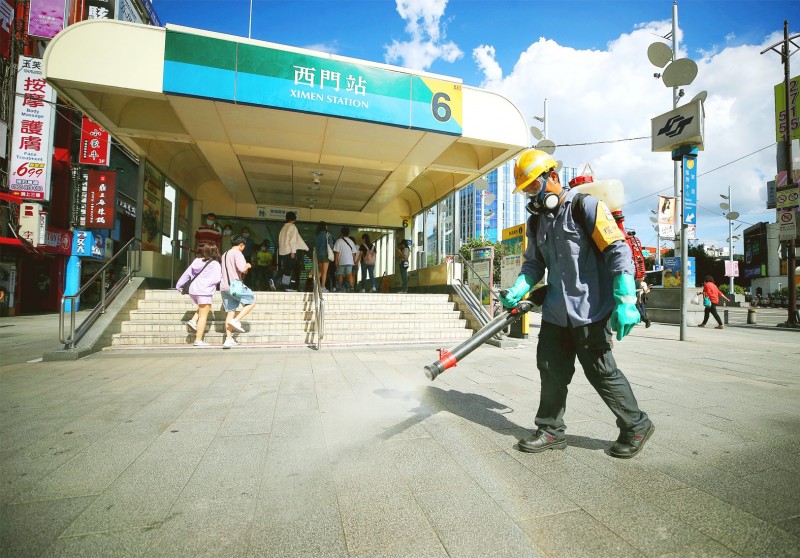 A Taipei Department of Environmental Protection employee sprays sanitizer outside an exit of the Ximen MRT station in Taipei yesterday. Photo: CNA

NEW CASE REPORTED: A man who returned from South Africa on a flight with the nation’s 460th and 461st cases has now tested positive for the disease

The Central Epidemic Command Center （CECC） yesterday said that there is no need to test all arrivals to the nation for COVID-19, a policy the Executive Yuan supports.

The center reported one new imported case, bringing the nation’s tally of confirmed cases to 477.

The new case is a Taiwanese man in his 60s who on July 25 returned from South Africa, said Centers for Disease Control （CDC） Deputy Director-General Chuang Jen-hsiang （莊人祥）, who is also the CECC’s spokesman.

The man had returned to Taiwan on the same flight as cases Nos. 460 and 461, reported on July 27, Chuang said.

On July 24, the three had shared a taxi to the airport in South Africa, Chuang added.

Upon their arrival in Taiwan, the man did not show any symptoms and was sent to a disease prevention hotel, Chuang said.

On Monday, the man began experiencing diarrhea, muscle aches and fatigue, after which health authorities arranged for him to be tested, Chuang said.

The man has been hospitalized, and since he went directly to a disease prevention hotel upon his arrival and did not come into contact with friends or relatives, no one is shown as having had contact with him, the center said.

The center has identified 31 people as having had contact with case Nos. 460 and 461, and as of yesterday, two of them had shown suspected symptoms of COVID-19, including case No. 477, who tested positive for the disease, and another who tested negative, the center said.

National Taiwan University Hospital pediatrician Lee Ping-ing （李秉穎）, a member of the CECC’s expert advisory panel, said the panel has discussed many of the recommendations it has received, including universal testing of all citizens and testing of all inbound travelers.

However, before implementing any policy, the center must consider its cost effectiveness, Lee said.

For example, lockdowns would be “very effective” in curbing the spread of disease, he said.

While at the start of the pandemic some people had suggested that the nation go into lockdown, he said in retrospect those suggestions were “unnecessary” given the situation in Taiwan.

Meanwhile, the Executive Yuan yesterday also said the nation would not be adjusting its COVID-19 prevention strategy.

During a news conference after a Cabinet meeting, Executive Yuan spokesman Ting Yi-ming （丁怡銘） quoted Premier Su Tseng-chang （蘇貞昌） as saying that although some cases have led to recommendations of universal testing of incoming travelers, based on the analysis of CECC experts, communities in Taiwan are relatively safe compared with other nations.

The countries that have adopted COVID-19 screening upon arrival are areas where the situation is relatively severe, Ting said.

In comparison, Taiwan’s strategy — which is to test arrivals with symptoms, while those without symptoms have to undergo a 14-day at-home quarantine — has thus far produced good results, Ting quoted Su as saying.