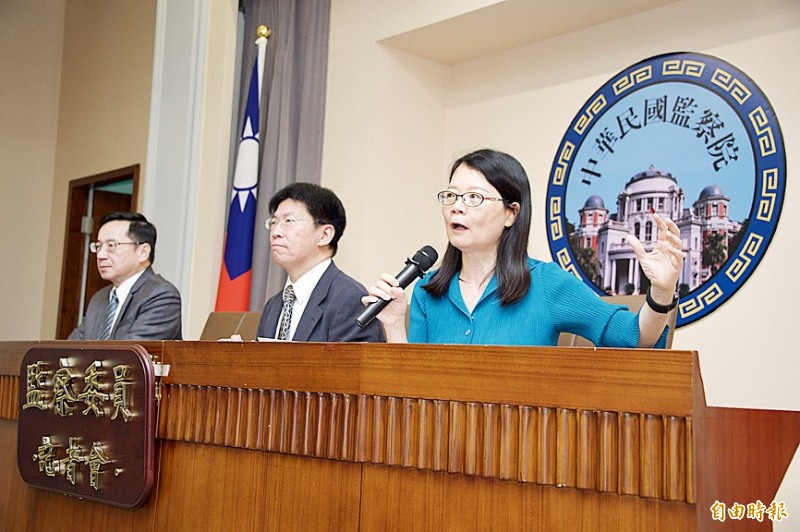 PERSONAL CONSUMPTION: The president implemented a policy that officials’ bags should be checked like those of regular travelers, unless they contain sensitive data

The Control Yuan yesterday served corrective notices to the Ministry of Transportation and Communications （MOTC）, the Ministry of Foreign Affairs （MOFA） and the Customs Administration over a cigarette smuggling case involving security officials last year, while urging the judiciary to look into the issue and implement special disciplinary action.

Last year, then-NSB official Wu Tsung-hsien （吳宗憲）, along with 12 others, allegedly attempted to smuggle 9,797 cartons of cigarettes — worth an estimated US$200,000 — into Taiwan after accompanying President Tsai Ing-wen （蔡英文） on a state visit to the Caribbean.

Kao said that reports surfaced as early as March 2016 of people landing and picking up uncommonly large orders of duty-free tobacco products that they had purchased before departing Taiwan.

The incidents apparently started in January 2010 with a sale of 1,683 cartons, while the number of tobacco products purchased escalated after October 2017, when 2,242 cartons were sold, Kao said, citing an internal report by China Airlines on transactions of duty-free tobacco products on presidential flights.

Koa said that China Airlines failed to follow regulations, while MOFA and the Customs Administration failed to handle the issue correctly, creating a loophole exploited by many members of presidential entourages.

MOFA cites former president Yen Chia-kan’s （嚴家淦） visit to Saudi Arabia in 1977 as a precedent, saying that members of the president’s entourage are treated as visitors of state, but according to the Regulations Concerning Courtesy Clearance Operations at Taiwan Taoyuan International Airport （國際機場禮遇作業辦法）, this is not the case, Kao said.

The Customs Administration’s failure to ensure that the amount of tobacco products purchased was reasonable, based on the type of aircraft flown, and that the purchases were properly loaded, aided and abetted those seeking to exploit legal loopholes, Kao added.

Kao also said that the Presidential Office’s lack of punitive measures for those involved, compared with the punishments for the NSB agents and officials, was an oversight of justice.

Kao said the notices were served without ulterior motives, when asked by the media if they had been fast-tracked so that they could be served before former Presidential Office secretary-general Chen Chu （陳菊） assumed her position as Control Yuan president.

Asked why the Control Yuan did not impeach those involved, Kao said that the agency at fault was the NSB’s special service center, but impeachment was of little value as then-NSB director-general Peng Sheng-chu （彭勝竹） had resigned, while chief aide-de-camp to the president Chang Chieh （張捷） and deputy aide-de-camp to the president Liu Hui-chien （柳惠千） have all received major and minor demerits over the incident.

The MOTC said that it has already asked China Airlines to submit a report on the scandal, adding that the airline has also fully cooperated with prosecutors to facilitate an investigation into the case.

The airline, in addition to proposing six major measures to prevent similar incidents, has held personnel involved in the case accountable, the MOTC said.

“We will review any more suggestions from the Control Yuan and comply accordingly,” the it added.

Staff members accompanying the president are required to act in a group, but the purchase of duty-free products on charter flights is considered personal consumption, the foreign ministry said in a statement.

Tsai implemented a policy that the bags of accompanying officials should be checked like those of regular travelers, unless their bags contain sensitive items related to national security, it said, adding that the policy was carried out on the trips of former vice president Chen Chien-jen （陳建仁） in October and December last year.