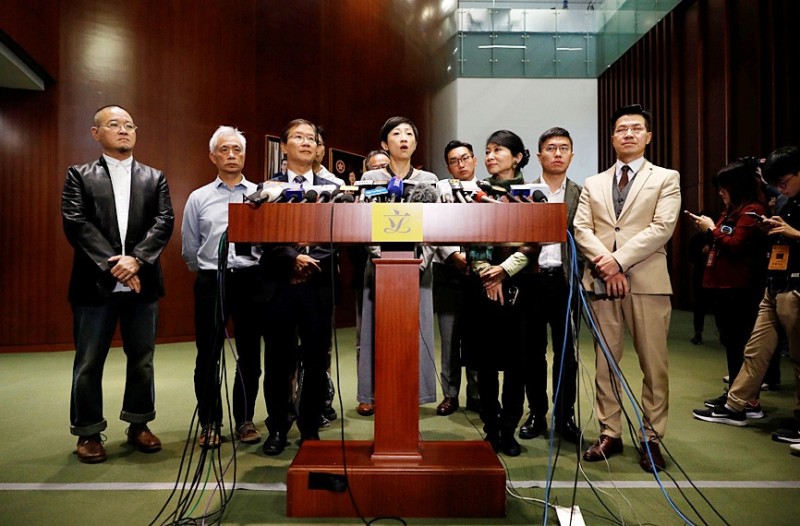 ‘GOLDEN OPPORTUNITY’: One lawmaker called on the Hong Kong government to persuade Beijing to back an independent commission of inquiry into the allegations

An international panel of experts hired to advise Hong Kong on the police response to huge pro-democracy protests yesterday announced that they were quitting, saying that the watchdog was not fit for purpose “in a society that values freedoms and rights.”

The group’s damning conclusion was a blow to the Hong Kong government, which has insisted that its Independent Police Complaints Council （IPCC） is capable of holding the Hong Kong Police Force to account over snowballing claims of brutality.

“We ultimately concluded that a crucial shortfall was evident in the powers, capacity and independent investigative capability of IPCC,” the experts said.

Critics have long said the body lacks adequate powers, is stacked with pro-establishment figures and has been toothless when it comes to keeping the police in line.

The watchdog can only handle complaints forwarded by the police and it cannot subpoena documents or compel witnesses to testify.

Such limitations do not “begin to meet the standards citizens of Hong Kong would likely require of a police watchdog operating in a society that values freedoms and rights,” the experts said.

Protests have rocked Hong Kong for more than six months, with up to 2 million people taking to the streets, initially against a now-withdrawn extradition bill.

One of the core demands of protesters — alongside fully free elections — has been an inquiry into the police, who have been left to battle increasingly violent black-clad activists and are now loathed by significant chunks of the deeply polarized population.

However, Hong Kong Chief Executive Carrie Lam （林鄭月娥） and the police have repeatedly rejected those calls.

Pro-democracy lawmaker Tanya Chan （陳淑莊） described the resignation of the expert group as a “vote of no confidence” in the IPCC and the interim report it is expected to produce next year.

“The government’s strategy of making the report independent by having a panel of overseas experts has failed,” Ma told reporters.

The panel was announced in September and was chaired by Sir Denis O’Connor, who was tasked by the British government to write a report on the police after the 2011 London riots.

It also included current or former police watchdog chiefs from Canada, Australia and New Zealand, and a British specialist on crowd behavior.

Last month, a leaked statement from the group revealed that they felt the council was not equipped to carry out a proper investigation and suggested a fully independent inquiry would be better suited.

However, their frank assessment was not welcomed by IPCC chairman Anthony Neoh （梁定邦）.

He gave an interview to a Chinese media outlet rebuking the panel, saying that they “do not understand Hong Kong’s situation.”

On Sunday, an estimated 800,000 people marched peacefully through the territory’s streets in a movement that has become a popular revolt against Beijing’s authoritarian rule.

The past three weeks have seen a rare lull in the violence and vandalism after pro-democracy candidates won by a landslide in local council elections.

“Do not waste time and please grab this golden opportunity to persuade Beijing ... to support an independent commission of inquiry,” Chan said.