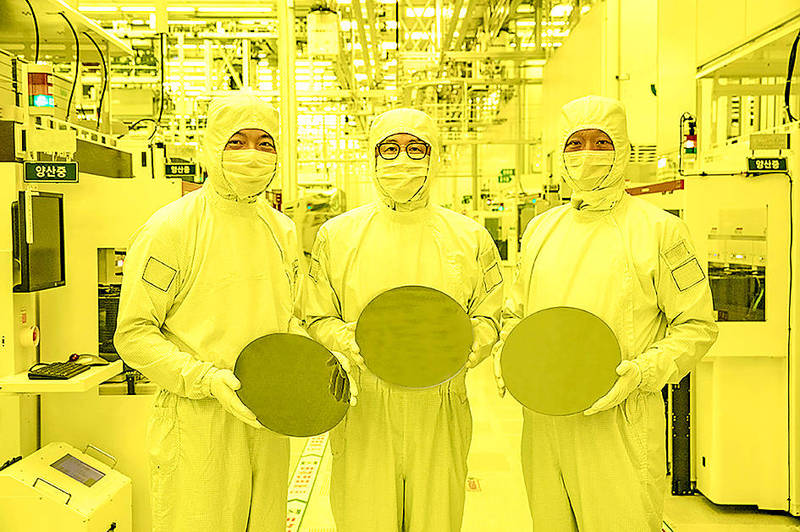 Samsung Electronics Co yesterday commenced mass production of 3-nanometer chips that are more powerful and efficient than predecessors, beating rival Taiwan Semiconductor Manufacturing Co （TSMC, 台積電） to a key milestone in the race to build the most advanced chips in the world.

South Korea’s largest company said in a statement that it was beginning with 3-nanometer semiconductors for high-performance and specialized low-power computing applications before expanding to mobile processors.

Samsung’s push to be first to market with the latest technology is essential in its uphill climb to match TSMC, which remains dominant in the contract chipmaking market.

The Taiwanese firm accounts for more than half of the global foundry business by revenue and is the exclusive supplier of Apple Inc’s silicon processors for iPhones, iPads, MacBooks and desktop Mac PCs.

TSMC has said its 3-nanometer technology would be the most advanced technology when it is introduced in the second half of this year.

The technology would first be used to manufacture chips for high-performance-computing applications and smartphones, it said.

TSMC adopts a different approach in developing its 3-nanometer technology. The company said it adopts the FinFet transistor structure to deliver the best technology maturity, performance and cost for its customers.

TSMC and Samsung are competing for large multiyear orders from the likes of Apple and Qualcomm Inc.

Samsung is producing the 3-nanometer chips at its Hwaseong facilities and is expected to extend that production to its newest Pyeongtaek fab.

Samsung’s 3-nanometer chip needs to demonstrate that it can be produced at the same cost-efficiency level as TSMC’s most advanced N3 process before it can gain new orders from Apple, Qualcomm and other large chip designers, Shum added.

Samsung’s advance comes at a sensitive time for the semiconductor industry, whose place in the global geopolitical order is currently under scrutiny by leading governments.

The US and China have both taken steps to bring more chipmaking capacity and expertise within their borders — arguing it is a matter of national security — and Samsung is in the process of setting up a new fabrication facility in Texas.