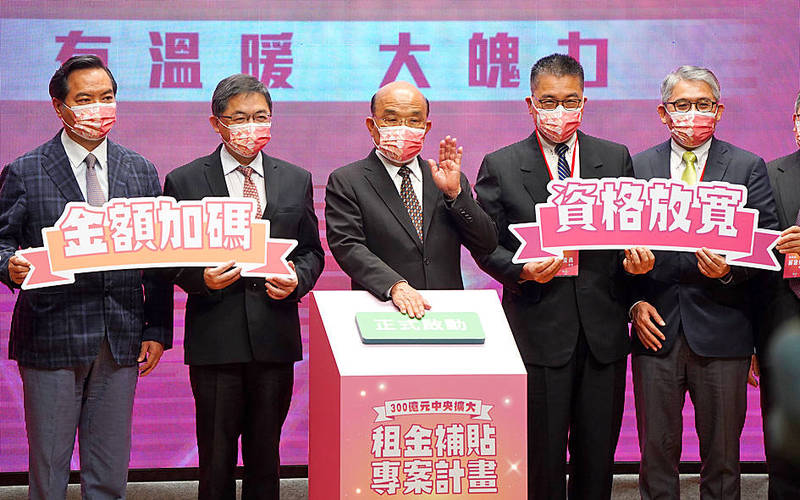 The Executive Yuan’s NT$30 billion （US$1.01 billion） rental subsidy program, which is estimated to benefit 500,000 families, will start accepting applications today, Premier Su Tseng-chang （蘇貞昌） said yesterday, adding that the money would be wired to the accounts of approved applicants on World Habitat Day, or Oct. 3.

The policy’s looser regulations should make it easier for those who have had difficulty applying for government subsidies before, while landlords should also benefit from retaining tenants, Su said.

The subsidy, a four-year program with an annual budget of NT$30 billion, is open to applicants who make three times the lowest wages in their area, the Ministry of the Interior said.

People living in unsanctioned additions to top floors or unregistered buildings can also apply for the subsidy, the ministry said.

Su said that despite such beneficial measures to implement housing justice, the government continues to be prudent in managing its budget, having paid off more debt this year than any year in the past two decades.

Minister of the Interior Hsu Kuo-yung （徐國勇） said the policy is an important part of implementing housing justice, and is aimed at helping young and elderly people.

Hsu added that he was confident that the government would be able to implement the policy to its fullest extent.

The program, based on different rates set by local governments, would offer students renting off-campus a subsidy of NT$2,400 to NT$3,600 per month, up from NT$1,200 to NT$1,800 prior to the amendment, the Executive Yuan said, adding that the changes would take effect in September.