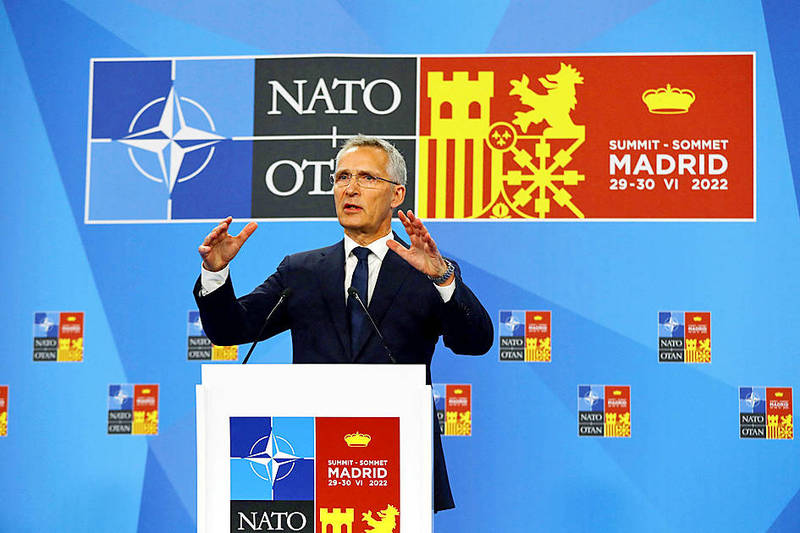 HYBRID THREAT: Lauding the alliance’s global vision in facing up to China’s challenges, MOFA said that Taiwan would continue to bolster cooperation with democratic allies

NATO has for the first time singled out China as one of its strategic priorities for the next decade, warning about its growing military ambitions, confrontational rhetoric toward Taiwan and other neighbors, and increasingly close ties to Russia.

In Taipei, the Ministry of Foreign Affairs （MOFA） yesterday said it appreciates the alliance’s global vision in facing up squarely to the systemic challenges posed by China.

While Russia’s war against Ukraine has dominated discussions at the NATO summit in Madrid, China on Wednesday earned a place among the Western alliance’s most worrying security concerns.

“China is not our adversary, but we must be clear-eyed about the serious challenges it represents,” he said.

The strategic document directed its harshest language at Russia, but the mere mention of China was significant; the 2010 document did not discuss China. The official turn by NATO puts the world’s largest military alliance based on the US armed forces on guard against China, which has the world’s second-largest economy and a rapidly growing military, both in numbers and in top-notch technology.

“One of the things that [China is] doing is seeking to undermine the rules-based international order that we adhere to, that we believe in, that we helped build,” US Secretary of State Antony Blinken said. “And if China’s challenging it in one way or another, we will stand up to that.”

“NATO will step up cooperation with our Indo-Pacific partners, including on cyberdefense, new technologies, maritime security, climate change and countering disinformation,” Stoltenberg said.

“These global challenges demand global solutions,” he said, adding: “We will also do more with our partners.”

China has yet to condemn Russia’s four-month war against Ukraine and has criticized sanctions brought against Moscow by NATO members.

Western leaders are concerned that Russia’s aggression in Ukraine could embolden China to be more assertive over Taiwan.

China has greatly increased its diplomatic reach via foreign investment, especially in central Asia and Africa. Now it is seeking to match that with greater military might, especially in the South China Sea, where it has built bases on disputed islands.

The US Navy has pushed back by conducting drills in those waters.

MOFA said that Taiwan, as a responsible member of the Indo-Pacific region, would continue to bolster its cooperation with democratic allies around the world to fight against the “hybrid threat” posed by authoritarian regimes.

Taiwan will safeguard the peace and stability of the Taiwan Strait and the Indo-Pacific region along with the rules-based world order, ministry deputy spokesman Tsuei Ching-lin （崔靜麟） said.

The ministry was referring to remarks by Truss, who yesterday said that the West must learn from its mistakes in failing to deter Russia’s invasion of Ukraine, and apply those lessons to Taiwan to “protect peace and stability in the Taiwan strait.”

She avoided questions about whether she was suggesting that Britain should arm Taiwan, saying only: “We also need to make sure that together, the free world are ensuring that Taiwan has the defense capability it needs.”