《TAIPEI TIMES》 Ministry to decide on electricity pricing on Monday 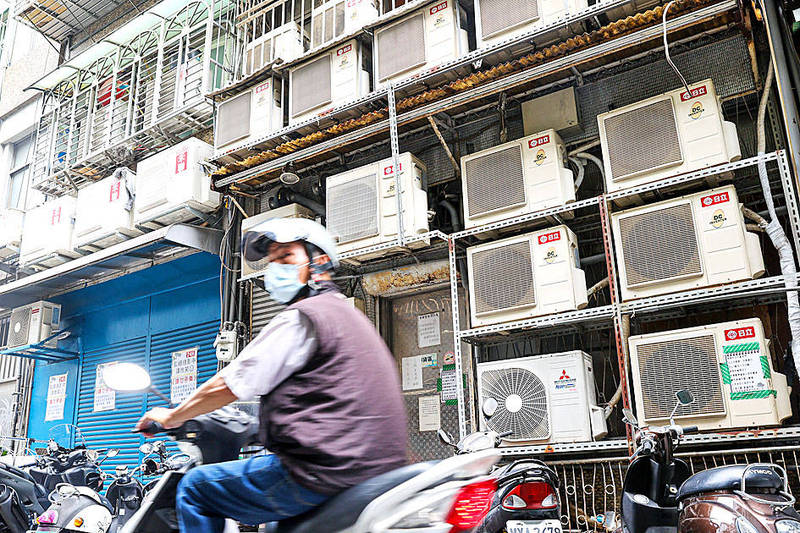 A man on a scooter rides past air-conditioner units outside a building in Taipei on Tuesday. Photo: CNA

EIGHT PERCENT? A likely increase for heavy users, which is unlikely to affect regular households, is needed because energy providers are incurring losses, a report said

The Ministry of Economic Affairs is to review Taiwan’s electricity pricing policy on Monday, amid speculation that the current rate, which has remained unchanged for four years, could be raised by 8 percent for heavy users.

The Liberty Times （the Taipei Times’ sister newspaper） on Tuesday reported that the average rate of NT$2.6253 （US$0.09） per kilowatt-hour （kWh） would be increased by 8 percent for businesses and households that use more than 1,000kWh a month.

The semiannual review of electricity rates, which was postponed from March 29 due to volatile global fuel prices, is unlikely to affect regular households, which generally do not consume more than 500kWh a month, the Liberty Times said.

The hike would breach the 3 percent cap generally allowed for rate increases, but is considered necessary because state-run Taiwan Power Co （台電） and its natural gas provider, CPC Corp, Taiwan （台灣中油）, are expected to incur losses in excess of NT$100 billion this year, the Liberty Times reported, citing a source.

The ministry said that it would listen to the advice of experts who are to participate in the review before it makes a decision.

The ministry’s reviews of electricity pricing, which are usually conducted in March and September, have not resulted in a rate hike since a 3 percent hike was introduced in April 2018.

On March 29, the ministry announced that pricing increases would be delayed because incorporating high fuel prices into the government’s formula for the pricing of electricity would lead to a hike in energy prices, causing consumer prices in Taiwan to spike further.

Unlike a universal rate hike, which would reflect costs, a pricing adjustment that only targets heavy users is simply punishing local industries, Lin said.

Such discrimination would absolutely lead to the relocation of Taiwanese manufacturers overseas, he said.

Meanwhile, a coalition of environmental groups issued a joint statement supporting a “reasonable increase” in the electricity rate, saying that it would help Taiwan achieve its target of net-zero carbon emissions by 2050.

However, the hike should target industrial sectors and heavy users because they are the main users of electricity, said the groups, which included the Green Citizens’ Action Alliance and Citizen of the Earth, Taiwan.

The groups also urged the government to introduce policies to promote energy saving by industries and help disadvantaged groups upgrade their home appliances.