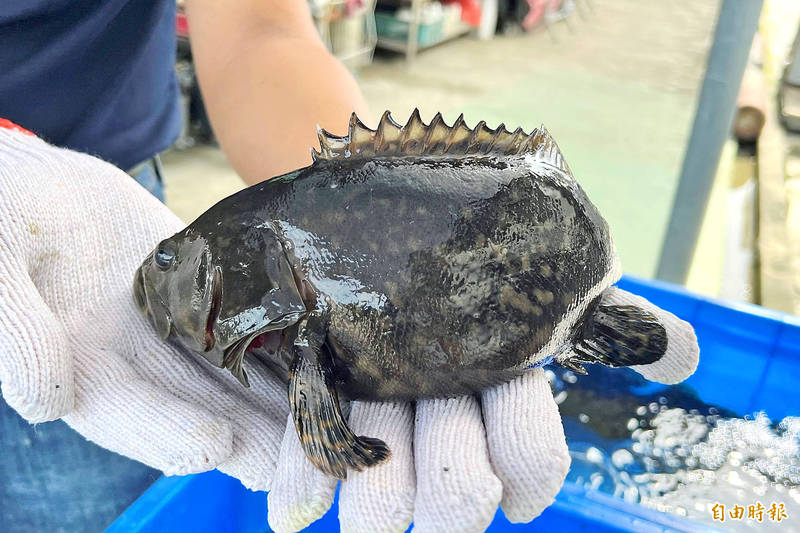 A king grouper is displayed by a vendor at a fish market in Tainan on Thursday. Photo: Yang Chin-cheng, Taipei Times

‘DEMOCRATIC FISH’: Soichiro Hayashi said he wants to return Taiwan’s kindness after it helped with relief efforts after the March 11, 2011, earthquake and tsunami

Soichiro Hayashi, president of the Hayashi Trout Farm in Japan’s Fukushima Prefecture, is leading the push for Taiwanese grouper imports, the newspaper said.

His call has caught the attention of several large sushi chains, the report said.

Hayashi, who is the Fukushima branch head of the Friends of Lee Teng-hui Association in Japan, is supportive of Taiwan and wants to return Taiwan’s kindness after it helped with relief efforts after the March 11, 2011, earthquake, the report said.

Fish from disaster-stricken areas were difficult to sell immediately after the earthquake, given fears of radiation after the meltdown at the Fukushima Dai-ichi nuclear power plant, Hayashi told the Sankei Shimbun.

“The feeling of not being able to sell the fish that you work so hard to breed resonated with me,” he said.

Hayashi plans to import two to three tonnes of grouper samples for restaurateurs, and hopes to send a group to Taiwan to inspect the farms’ conditions before importing larger quantities, it said.

Grouper fish is delicious and many Japanese would support Taiwan in this cause as it fights Chinese oppression, Hayashi told the newspaper, adding that the “democratic fish” could become a trend and add to demand.

Chen Chien-han （陳建翰）, a fish farmer in Pingtung, yesterday said that he is grateful for Hayashi’s gesture.

“It is a cycle of kindness,” Democratic Progressive Party Legislator Cheng Yun-peng （鄭運鵬） said yesterday, adding that Japanese businesses are looking for opportunities to help Taiwan.

The high price of grouper is its largest obstacle when exporting to Japan, given that Japanese have a wide variety of fish to choose from, Chen said, adding that imported fish is rarely seen in Japan apart from cod and salmon.

Su is also scheduled to visit the Hayashi Trout Farm during his trip and attend events to promote Taiwanese grouper, they said.