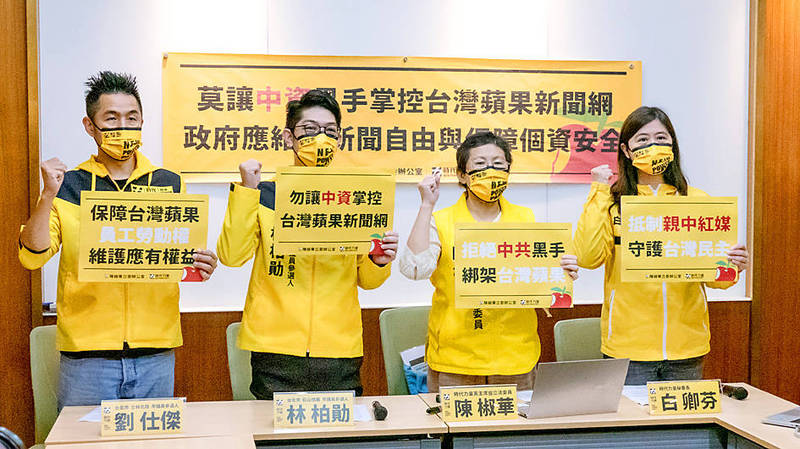 SAFETY ISSUE: An NPP member said that people who wrote under pseudonyms and criticized China might have their identities exposed and be put in danger

The National Security Council （NSC） should block any sale of the Apple Online news Web site to foreign owners backed by Chinese capital, as the news site could be used to influence domestic media or incriminate writers, the New Power Party （NPP） said yesterday.

Apple Online, which is linked to Hong Kong’s shuttered Apple Daily newspaper, on Wednesday announced that it had secured new ownership, although it has not yet identified who is behind the deal.

Many have raised concerns about the deal, leading Mainland Affairs Council spokesman Chiu Chui-cheng （邱垂正） to say on Thursday that a change in ownership would be subject to “strict scrutiny.”

NPP members yesterday urged further action, calling on the government to block the sale to avoid being “condemned by history” for allowing the news site to fall under the control of Chinese.

Apple Online has accumulated years of personal information and interviews with the nation’s politicians and business leaders, including sensitive unpublished content, NPP Legislator Chen Jiau-hua （陳椒華） told a news conference at the legislature in Taipei.

People trusted Apple Online when it was controlled by Next Digital and many people writing under pseudonyms were critical of the Chinese government, said Jerry Liu （劉仕傑）, an NPP candidate for Taipei City councilor.

If a hostile foreign power received their identities, their safety could not be guaranteed, Liu said.

Although the site is subject to Taiwanese law and its sale must be approved by the Investment Commission, the issue of its ownership has bigger implications than for other acquisitions, so any deal should be handled by the NSC, he said.

Private data from Apple Online could also be used to sow discord in Taiwan, as any information that is released — regardless of its veracity — could influence the direction of domestic politics and discourse, said Lin Pai-hsun （林柏勛）, another NPP candidate for Taipei City councilor.

If sensitive information falls into Chinese hands, “they would not need to fire a single bullet or missile to destabilize Taiwan,” Lin said.

The government should look at the US Committee on Foreign Investment — an interagency entity that reviews the national security implications of foreign investments in US companies — and consider upgrading the Investment Commission to give it the authority to review national security cases, set penalties and conduct investigations, Pai said.

As it is a matter of national security, the government should publicly oppose a sale of Apple Online, Chen said, adding that the NSC should establish a committee to investigate any deal and block it.

“The media has become a battleground for the Chinese Communist Party,” she said. “Our government cannot sit idly by as the Apple Online acquisition takes place.”

Defending the nation’s democracy starts with stopping this sale, Liu said, adding that “if we do not act today, Taiwan will be the next Hong Kong tomorrow.”