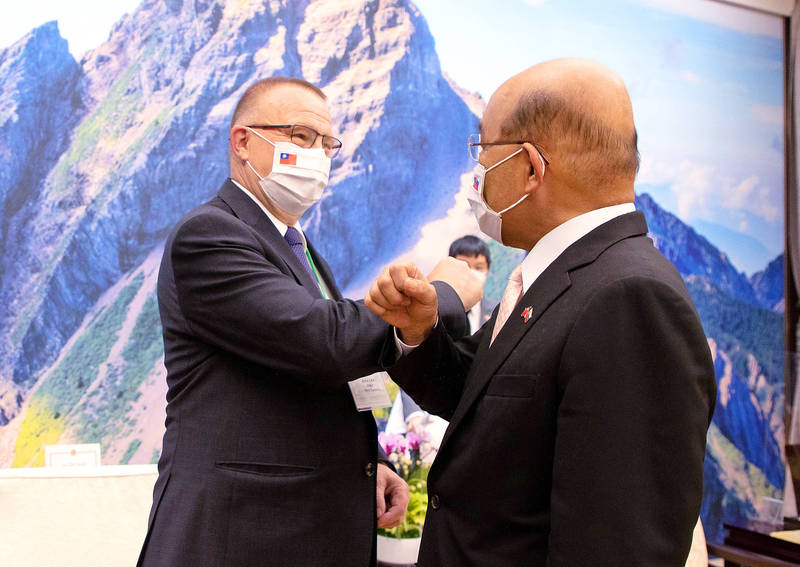 DUAL DONATIONS: Milan Laurencik said he believed that Slovakia and Taiwan would remember the COVID-19 pandemic as a time when the ties became closer and stronger

Laurencik, on the second day of his 10-member delegation’s visit to Taiwan from Sunday until Friday, made the remarks when meeting Premier Su Tseng-chang （蘇貞昌）, adding that it was a pleasure to visit Taiwan.

“Taiwan is geographically far from Slovakia, but the two have the same goal of safeguarding democracy,” Laurencik said.

He expressed gratitude to Taiwan for donating 700,000 masks to Slovakia when the COVID-19 pandemic there was at its most serious.

Laurencik said he believed that Slovakia and Taiwan would remember the pandemic as a time when ties between the nations became closer and stronger.

Three committees of the Slovak National Council have passed a resolution to support Taiwan’s bid to join the World Health Assembly and other WHO events, as Taiwan has advanced science and medicine capabilities, he said.

“Taiwan has provided great help to Slovakia through trade” as Taiwanese companies offered job opportunities, new horizons and safety to thousands of Slovakians, he said.

He wished Taiwan a peaceful future and called on like-minded nations to pay attention to democratic allies’ response to Russia’s invasion of Ukraine.

“We are obligated to stand side-by-side with other democratic countries and contribute to the well-being of Slovakian and Taiwanese people,” he said.

Su said the two nations would support each other during difficult times, adding that the delegation has witnessed first-hand that China’s promise to “take care of Taiwanese” is a lie.

In related news, European think tank GLOBSEC has released its Trends 2022 report, which includes a section on central and eastern Europeans’ perceptions of Taiwan’s position.

The report showed that 41 percent of survey respondents considered Taiwan to be an “independent country,” while 21 percent considered it a “disputed country,” 13 percent “part of China” and 25 percent “do not know.”