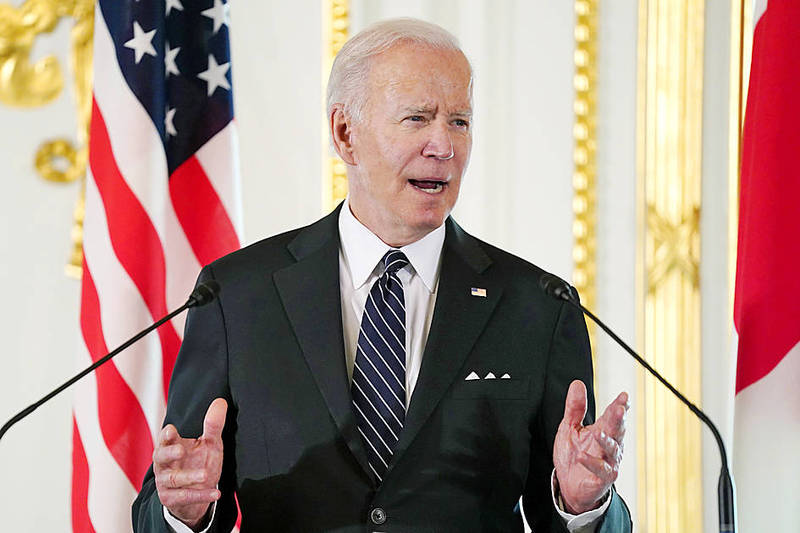 FATES LINKED: The US president said that sanctions on Russia over Ukraine must exact a ‘long-term price,’ because otherwise ‘what signal does that send to China?’

By Kayleigh Madjar / Staff writer, with AFP and CNA

US President Joe Biden yesterday vowed that US forces would defend Taiwan militarily in the event of a Chinese attack in his strongest statement to date on the issue.

Asked if Washington was willing to get involved militarily to defend Taiwan, he replied: “Yes.”

“That’s the commitment we made,” Biden said. “We agreed with the ‘one China’ policy, we signed on to it ... but the idea that it can be taken by force is just not appropriate, it would dislocate the entire region and would be another action similar to Ukraine.”

Biden directly linked the fates of Ukraine and Taiwan, saying that sanctions on Russia must exact a “long-term price,” because otherwise “what signal does that send to China about the cost of attempting to take Taiwan by force?”

He warned that Beijing was “flirting with danger right now by flying so close and all the maneuvers undertaken,” referring to a growing number of Chinese sorties, naval exercises and other power projections in the Taiwan Strait.

In Washington, the White House said that Biden was not diverging from the US’ official “one China” policy, which includes the commitment to “provide Taiwan with the military means to defend itself.”

In Taipei, Ministry of Foreign Affairs spokeswoman Joanne Ou （歐江安） thanked Biden and the White House for their “rock solid” commitment to Taiwan.

The threat China poses to security in the Taiwan Strait is of great concern to the international community, Ou told reporters, adding that Taiwan’s determination to defend its freedom and democracy has never changed.

In Beijing, Chinese Ministry of Foreign Affairs spokesman Wang Wenbin （汪文斌） said that “no one should underestimate the firm resolve, staunch will and strong ability of the Chinese people in defending national sovereignty and territorial integrity.”

“China has no room for compromise or concession,” Wang said.

Japanese public broadcaster NHK predicted that Biden’s comments would spark debate, as they appear to contradict the long-running US policy of “strategic ambiguity” toward Taiwan.

Biden made similar comments in October last year when asked during a CNN town hall whether the US would come to Taiwan’s defense, responding: “Yes, we have a commitment to do that.”

In August last year, he listed Taiwan among nations the US has a commitment to defend in comments to ABC News.

In both instances, the White House made statements shortly afterward saying that US policy toward Taiwan had not changed.

Meanwhile, Kishida called for stability in the Taiwan Strait and said that Tokyo was committed to boosting its defense spending, a sensitive subject in a nation with constitutional limits on its military.

“Japan will fundamentally strengthen its defense capacity, and to back that up will significantly increase its defense spending,” Kishida told a news conference held with Biden. “We do not rule out any options, including [acquiring] the capacity to counterattack.”