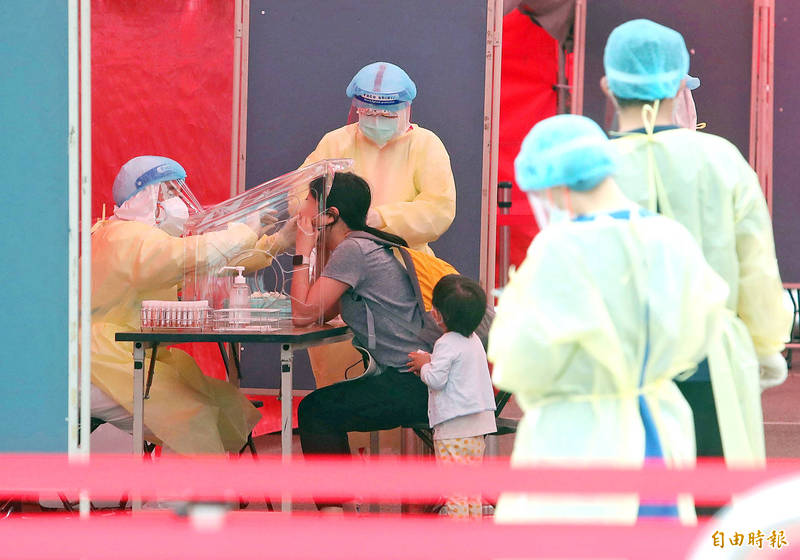 ADAPTING: The CECC said the policy change would happen this week at the earliest, while PCR testing stations would be used to diagnose people and prescribe drugs

The general public would be able to use a positive rapid test result that has been confirmed by a doctor for COVID-19 diagnosis starting later this week at the soonest, the Central Epidemic Command Center （CECC） said yesterday, as it reported 79,441 new local infections and 53 deaths.

The center on Saturday announced that it was expanding the rapid test diagnosis policy to people living in indigenous townships and outlying islands, starting today.

Minister of Health and Welfare Chen Shih-chung （陳時中）, who heads the center, yesterday said the policy might be further expanded to include “all people” this week, at the soonest.

He said that after a specialists’ meeting confirms the therapeutic indications for the oral antiviral drugs for treating COVID-19 and the administrative reporting procedures are revised, the center would make an official announcement on the matter.

As demand for polymerase chain reaction （PCR） tests would drop after the policy takes effect, Chen said the PCR testing stations would be transformed into COVID-19 diagnosis and drug prescription stations so that COVID-19 cases would not need to enter hospitals, reducing the risk of infection within hospitals.

Some PCR testing capacity would remain at the stations, as people who tested positive with a rapid test but do not agree with the result and people who have COVID-19 symptoms but tested negative using a rapid test can still undergo a PCR test for clarification, he said.

Centers for Disease Control Deputy Director-General Philip Lo （羅一鈞）, deputy head of the CECC’s medical response division, said some people with COVID-19 have the misconception that they should start taking oral antivirals — Paxlovid or molnupiravir — once they are infected.

“However, if they are not aged 65 or older, and do not have at least one of the 13 risk factors for severe COVID-19, they do not need to take the antivirals,” he said, adding that people who do not meet the eligibility criteria should avoid booking a doctor’s appointment if obtaining antivirals is their main purpose.

The 690 cases that are severe at present account for 0.06 percent of all local cases reported this year, as of Saturday, he said.

Of the 53 deaths, 52 people had underlying health conditions, 28 were aged 80 or older and 17 were unvaccinated, Lo said.

He later had a PCR test at a hospital and it came back positive with a cycle threshold value of 16.