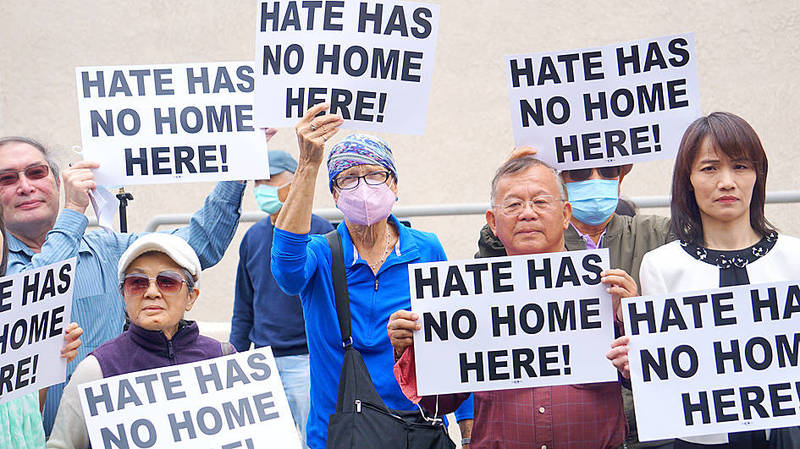 Taiwanese Americans in southern California on Saturday hold signs in response to a mass shooting at the Geneva Presbyterian Church in Laguna Woods on May 15. Photo: CNA

NO SECURITY: A statement issued by 60 civic groups said the shooting in Laguna Woods, California, was the result of China ‘provoking hatred’ toward Taiwanese

Members of 60 civic organizations on Friday issued a statement calling for a pro-unification group linked to a shooting at a church in California last week to be labeled a terrorist organization.

Five members of the Irvine Taiwanese Presbyterian Church congregation were injured and one killed when a man who has been linked to the Las Vegas branch of the China-based Chinese for Peaceful Unification — a group advocating for the unification of Taiwan and China — entered a meeting of Geneva Presbyterian Church members and allegedly began shooting.

A group of 60 organizations led by the Asia-Pacific Liberal Women Association issued the statement urging Taiwanese around the world to push their respective governments to label Chinese for Peaceful Unification a terrorist organization.

The statement urged the central government to immediately investigate groups within Taiwan believed to have links to the organization, and to “deal with them strictly” in accordance with the National Security Act （國家安全法）.

“We must keep Taiwanese safe and prevent the spread of hatred,” the statement said.

“This shooting stemmed from the Chinese Communist Party repeatedly provoking hatred toward the Taiwanese people within Taiwan and among Chinese communities globally,” it added.

China is using the unification group to attempt to intimidate Taiwanese around the world, and to prevent Taiwanese from pursuing freedom and democracy, it said.

Chinese for Peaceful Unification — which shooting suspect David Wenwei Chou （周文偉）, 68, was a reportedly member of — was identified by the US Department of State as being under the administration of the United Front Work Department of the Chinese Communist Party Central Committee, the statement said, adding that this means the organization is a threat to Taiwanese and should be labeled as such.

“We mourn the loss of Dr John Cheng （鄭達志） to this shooting, and we hope Taiwanese everywhere can unite at this difficult time to protect Taiwan’s freedoms for the next generation,” it said.

The statement also raised concerns over the High Court’s acquittal of New Party spokesman Wang Ping-chung （王炳忠） on espionage charges, asking how the court could have recognized Wang’s involvment in organizations with ties to the Chinese government without deeming him a national security threat.

“If we just wait for another shooting to occur, if we just let these groups sow division within Taiwanese society, isn’t that a national security threat?” the statement asked.