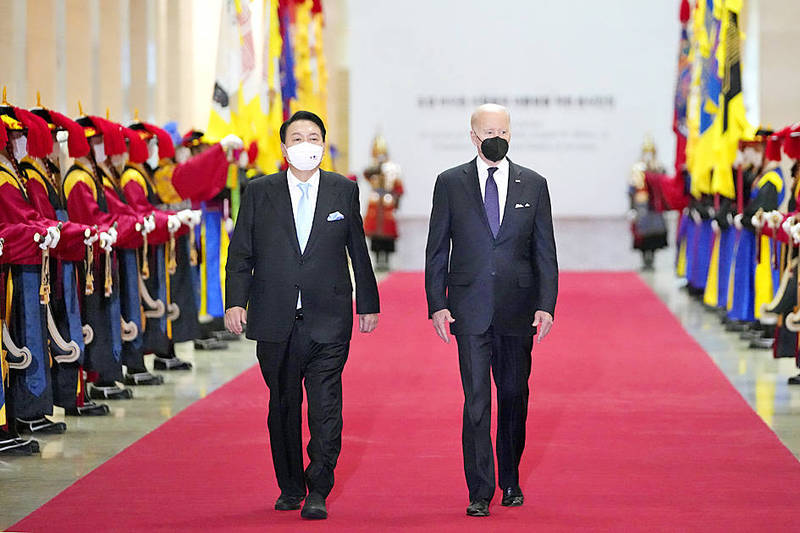 ‘ESSENTIAL ELEMENT’: The US and South Korean leaders expressed their mutual respect for freedom of navigation in international waters, including the South China Sea

US President Joe Biden and South Korean President Yoon Suk-yeol yesterday reaffirmed the importance of peace and stability across the Taiwan Strait as they vowed to expand their cooperation on a range of measures from cybersecurity and nuclear energy to regional security and supply chains.

“The two presidents reiterate the importance of preserving peace and stability in the Taiwan Strait as an essential element in security and prosperity in the Indo-Pacific region,” a joint statement said following the summit in Seoul.

Both leaders shared “mutual concerns regarding human rights situations in the Indo-Pacific region,” and restated their respect for international law “including freedom of navigation and overflight and other lawful use of the seas, including in the South China Sea and beyond,” the statement said.

Biden and Yoon said after the meeting that they would consider expanded joint military exercises to deter the nuclear threat from North Korea at a time when there is little hope of real diplomacy on the matter.

The announcement reflects a shift in direction by both leaders from their predecessors: Former US president Donald Trump had considered scrapping the exercises and expressed affection for North Korean leader Kim Jong-un. Former South Korean president Moon Jae-in remained committed to dialogue with Kim to the end of his term, despite being repeatedly rebuffed by the North.

Biden said cooperation between the US and South Korea shows “our readiness to take on all threats together.”

North Korea, which has defended its nuclear weapons and missile development as a necessary deterrence against what it describes as US threats, could well respond angrily to the announcement. It has long described joint military exercises as rehearsals for an invasion, although the allies have portrayed the drills as defensive.

Biden and Yoon affirmed in remarks at a joint news conference that their shared goal is the complete denuclearization of North Korea.

The US and South Korea said in a joint statement that they were committed to a “rules-based international order” following Russia’s invasion of Ukraine.

The statement likely sets the stage for how the US and its allies will address any challenges with North Korea.

Yet Biden also reiterated his offer of vaccines to North Korea as COVID-19 spreads at a dangerously fast speed through that country, including an offer to route them through China if that was more acceptable to North Korea.

Asked if he would be willing to meet with Kim, Biden said that would depend on whether the North Korean leader was “sincere” and “serious.”

“Yes, we’ve offered vaccines, not only to North Korea, but China as well,” Biden said. “We’re prepared to do that immediately. We’ve gotten no response.”

Speaking to reporters aboard Air Force One as Biden flew to South Korea, White House National Security Adviser Jake Sullivan said the US has coordinated with Seoul and Tokyo on how they would respond should the North conduct a nuclear test or missile strike while Biden is in the region or soon after.

Sullivan also spoke with Chinese Central Foreign Affairs Commission Director Yang Jiechi （楊潔篪） earlier in the week and urged Beijing to use its influence to persuade the North to cease the tests.