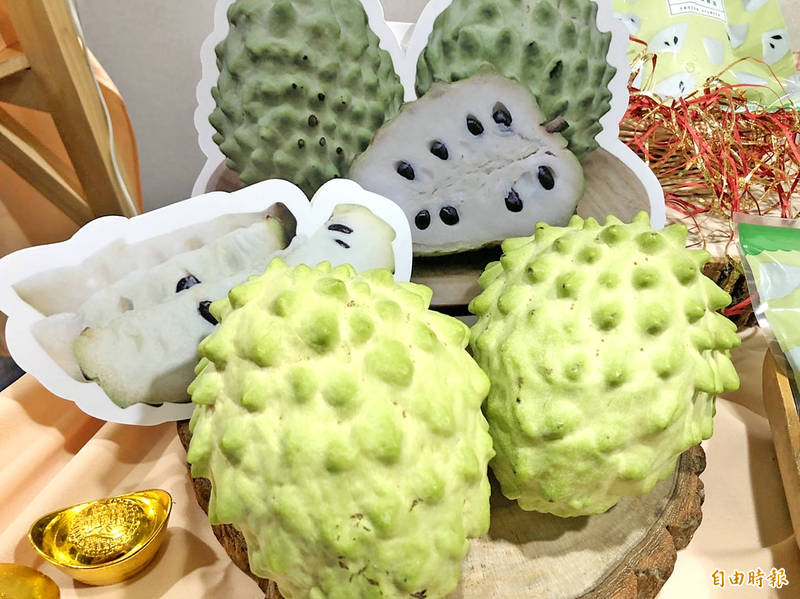 Taiwanese atemoyas, which are a hybrid of sugar apples and cherimoya, are displayed in an undated photograph. Photo: Yang Yuan-ting, Taipei Times

Taiwan hopes to obtain a permit to export sugar apples to Japan by the end of this year, the Bureau of Animal and Plant Health Inspection and Quarantine said on Tuesday.

The Council of Agriculture has applied for the permit as part of its efforts to diversify Taiwan’s export markets after Beijing banned imports of sugar apples, wax apples and pineapples from Taiwan, the bureau said.

Agricultural officials started to focus on Japan as a potential market after Taiwanese pineapples were received well by local consumers, while Singapore is another possible market, it said.

Taiwanese researchers have developed a proprietary flash-freezing technology especially to export sugar apples, the bureau said, adding that the technology is being released to the private sector.

The council has filed an application to export fresh and frozen sugar apples, and is awaiting approval, it said.

The bureau has sent documents regarding produce certificates and pest and disease control to its Japanese counterpart, it added.

In Japan, fresh fruits from regions affected by Oriental fruit flies must be sterilized by the country of origin before they are allowed into Japan, it said.

The council’s researchers have carried out experiments to determine whether freeze or steam sterilization worked better on sugar apples, and settled on the latter, the bureau said.

Steam sterilization would also be used for Taiwanese mangoes and lychees marked for Japan, which could eliminate the need for Japan to send officials to Taiwan to conduct inspections, it said.

Taiwanese officials have been carrying out inspections of these fruits since 2020 due to COVID-19 travel restrictions between the countries, it said.