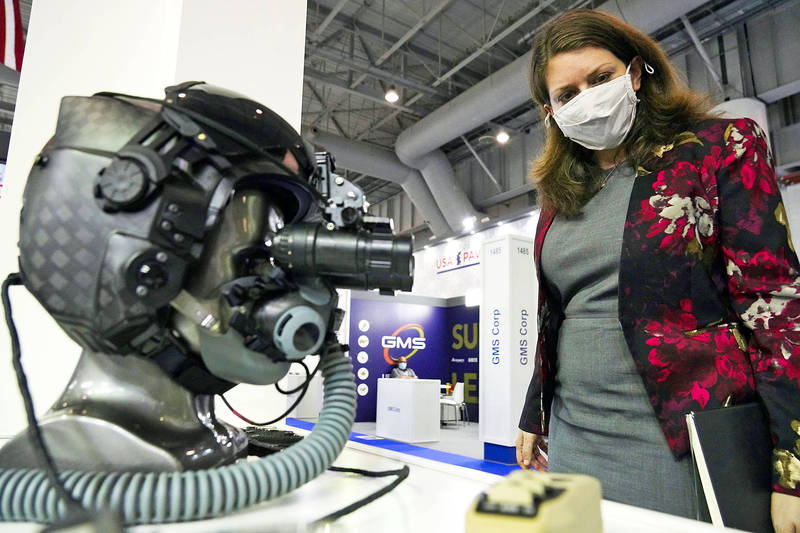 US Deputy Assistant Secretary of State for Regional Security Mira Resnick looks at night-vision goggles on display in the US section of the Dubai Air Show on Nov. 16 last year. Photo: AP

‘TOO RESTRICTIVE’: Ending US sales of weapons that do not fall under the category of ‘asymmetric’ would hamper Taiwan’s defense against China, two business groups said

Taiwan’s weapons procurement decisions are made based on its needs, and are not influenced by individual arms dealers, the Ministry of National Defense （MND） said yesterday after two US business groups questioned a US official’s comment on arms sales to Taiwan.

US Deputy Assistant Secretary of State for Regional Security Mira Resnick told the business groups via video link on Saturday that Washington would adjust the types of weapons sold to Taiwan and end “most arms sales to Taiwan that do not fall under the category of ‘asymmetric.’”

The American Chamber of Commerce in Taiwan and the US-Taiwan Business Council on Monday wrote a letter to Resnick, saying such a move could undermine Taiwan’s defenses.

In the letter, the groups called the arms sales “too restrictive,” saying that they would not be able to address challenges posed by the Chinese military.

“Far from accelerating Taiwan’s deterrent capabilities, we fear that the envisaged ‘asymmetric’ focus for Taiwan security assistance will result in policy confusion and a substantial slowing of overall arms sales,” said the groups, whose members include US defense contractors.

US President Joe Biden’s administration would deter Taiwan from submitting requests for some platforms, including MH-60R helicopters, because they “do not fit” the strategy, they said.

Taiwan signaled earlier this month that it had abandoned a plan to buy 12 of the advanced anti-submarine helicopters from the US because they were too expensive.

In Taipei, the ministry backed Resnick’s comments, saying in a statement that Taiwan purchases weapons from the US based on its asymmetrical warfare needs in accordance with the Taiwan Relations Act and the “six assurances” that the US would provide Taiwan with weapons to defend itself.

The asymmetric warfare tactic that Taiwan is deploying was jointly devised by Taipei and Washington, the ministry said.

Its main focus is not “specific, individual weapons systems,” but “an overall strategy” meant to disrupt a Chinese invasion and prevent Beijing from winning a decisive victory, it said.

The weapons systems Taiwan wants to buy from Washington are those that cannot be made or would take too long to make locally, and purchase decisions are made after careful assessments of the nation’s needs and enemy threats, it added.

“Those decisions will not be affected or influenced by individual arms dealers,” the ministry said.

In the letter, the business groups said that the US government is undermining Taiwan’s defenses by approving only the sale of weapons that Washington believes are essential for Taiwan to resist a full Chinese invasion.

The two business groups said that asymmetrical warfare, which is “subjectively defined,” and the US’ latest policy would create gaps in Taiwan’s military capabilities and “do immense long-term harm to Taiwan’s ability to deter and defend in all phases of conflict.”

“This would weaken Taiwan’s defense, making it more vulnerable to a successful Chinese attack,” the groups said.