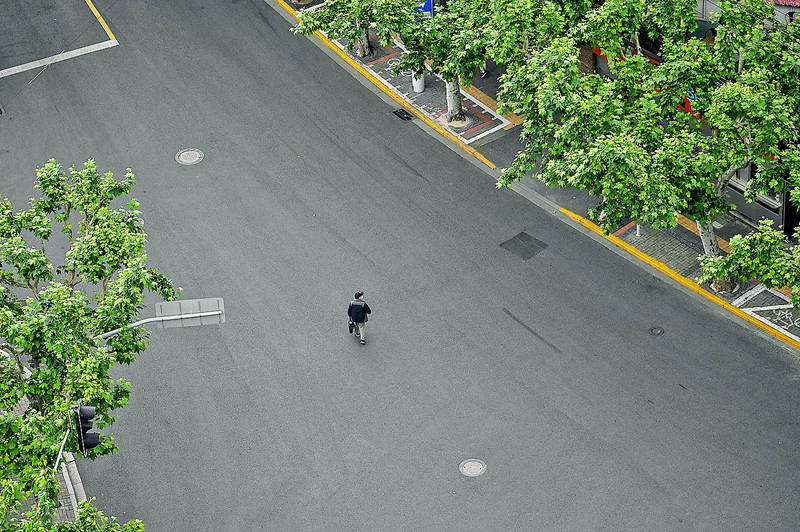 A man walks on a street amid a COVID-19 lockdown Shanghai’s Jingan District yesterday. Photo: AFP

China’s censors yesterday scrambled to wipe online debate over its “COVID-19 zero” strategy after the WHO criticized the country’s pandemic policies.

China’s COVID-19 policies have trapped most of Shanghai’s 25 million people in a lockdown with no clear end date, while Beijing has also gradually corralled many of its residents indoors as it battles its biggest outbreak since the pandemic began in 2020.

On Tuesday, WHO Director-General Tedros Adhanom Ghebreyesus urged China to change tack, saying that its approach “will not be sustainable” in the face of new fast-spreading variants.

The intervention prompted China’s army of Internet censors to snuff out his comments.

Searches for the hashtags “Tedros” and “WHO” on Chinese social media displayed no results, while users of the WeChat app were unable to share an article posted on an official UN account.

A social media hashtag about the WHO’s comments, which had been a rallying point for lively online discussion, appeared to have been blocked by mid-morning.

Before they were expunged from the Chinese Internet, comments had questioned Beijing’s policies, with one saying: “Even the WHO’s Tedros has now changed his stance.”

Another wrote: “Will our government listen to the WHO director-general’s recommendations?”

Virus controls are causing anger and frustration, especially in Shanghai.

The city has witnessed repeated protests and violent scuffles with police, images that have pinballed across social media before censors can catch up.

Chinese Ministry of Foreign Affairs spokesman Zhao Lijian （趙立堅） brushed off questions about the WHO’s comments, saying that Beijing’s policy “can stand the test of history” and was “scientific and effective.”

“We hope that relevant individuals can take an objective and rational view of China’s epidemic prevention and control policies ... and refrain from making irresponsible remarks,” Zhao told a regular news conference.

Discussing Beijing’s strategy on Tuesday, Tedros said that WHO experts “don’t think that it’s sustainable, considering the behavior of the virus now and what we anticipate in the future.”

Hu Xijin （胡錫進）, a former editor of China’s Global Times, slammed the comments in a message online, saying: “In the end, the WHO’s attitude isn’t important.”