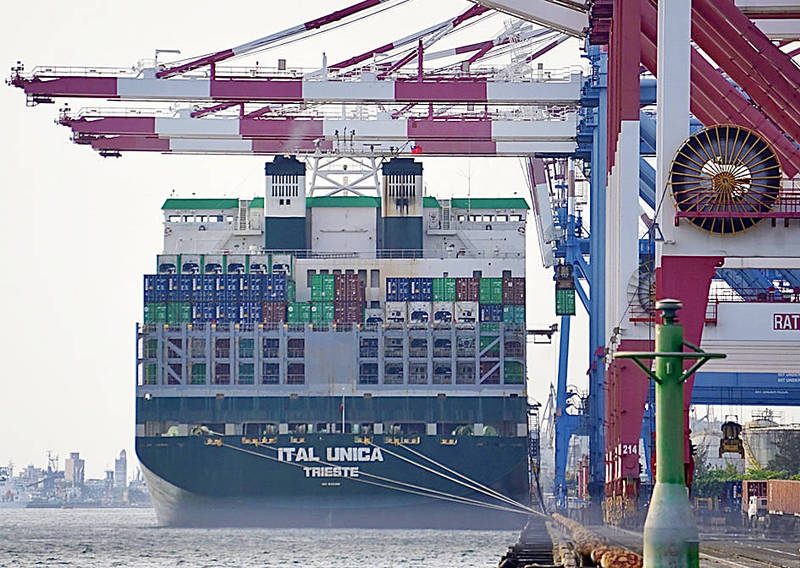 A container ship is docked at the Port of Kaohsiung yesterday. Photo: CNA

GLOBAL REACH: Shipments of electronics spiked 27.5 percent to US$17.21 billion, driven by demand for chips used in smartphones, computers and cars, a report said

The demand could also see outbound shipments rise to a new high this month with growth of 12 to 16 percent, Department of Statistics Director-General Beatrice Tsai （蔡美娜） said, adding that exports in May usually fare stronger than in April.

Shipments to major trade partners were overall higher, although they lost some momentum due to an economic slowdown in China because of the country’s strict COVID-19 prevention measures, she said.

Exports logged positive cyclical movements in the past 22 months and are moving steadily toward beating the 26-month expansionary cycle seen between November 2010 and December 2012, Tsai said.

Exports of information and communication technology products put up a relatively lackluster 10.2 percent increase to US$5.19 billion, as US demand for servers remained sturdy, while demand was more subdued in China and ASEAN markets, Tsai said.

The slowdown could likely be attributed to lockdowns in major Chinese cities, and merits close monitoring, she said.

The retreat is most evident in exports of optical products, which declined 15.6 percent to US$918 million, she added.

Plastic products were the only exception, with a 2.1 percent slip to US$2.37 billion, the report said.

China’s lockdowns not only affected Taiwan’s exports, but also weighed on imports, Tsai said, as material and component shortages could worsen.

The latest trade data gave Taiwan a trade surplus of US$4.91 billion, shrinking 19 percent from a year earlier owing partly to a strong US dollar.

For the first four months of the year, exports gained 22.3 percent year-on-year to US$162.4 billion, while imports rose 26 percent to US$142 billion, the ministry said.