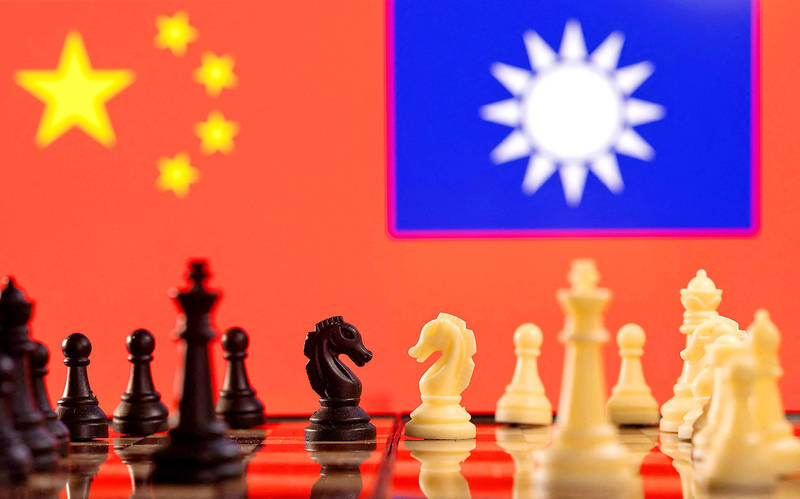 Chess pieces are pictured in front of China’s and Taiwan’s flags in an illustration photograph taken on Jan. 25. Photo: Reuters

SENSE OF URGENCY: The amendments would increase prison time and fines for people who work with foreign entities to steal information about ‘core’ technologies

The legislature hopes to pass amendments providing harsher punishment for economic espionage by the end of the month, sources said on Saturday.

Legislators aim to pass three readings of draft amendments to the National Security Act （國家安全法） and the Act Governing Relations Between the People of the Taiwan Area and the Mainland Area （兩岸人民關係條例） this month, sources said.

A proposed bill to amend the National Security Act, which passed a preliminary review on April 7, would prohibit people from helping China, Hong Kong, Macau, foreign countries or overseas hostile forces, or companies, organizations or people controlled by them, to infringe on the business secrets of the nation’s “core” technologies.

The amendment would also prohibit people from using and infringing on business secrets of the nation’s core technologies in China, Hong Kong, Macau and foreign countries, adding that offenders could face three to 10 years in prison or a fine of NT$5 million to NT$50 million.

A draft amendment to the Act Governing Relations Between the People of the Taiwan Area and the Mainland Area, which passed a preliminary review on March 25, would forbid Chinese businesses or Chinese-funded entities based outside China from engaging in business activities in Taiwan without government approval.

Offenders would face up to three years in prison and fines of up to NT$15 million, while anyone who allows Chinese-funded businesses to use their name to operate in Taiwan would face fines from NT$120,000 to NT$2.5 million, the draft amendment says.

Under the bill, legal persons, groups and members of entities commissioned, subsidized or invested in to a certain extent by government agencies to engage in businesses involving the nation’s core technologies would need government approval to travel to China.

During a negotiation at the legislature’s Internal Administration Committee on Thursday, New Power Party Legislator Chiu Hsien-chih （邱顯智） proposed a motion that the government regularly review and update the nation’s list of core technologies, which legislators and government officials at the meeting agreed to and added to the bills.

The drafts are to be negotiated in a cross-caucus meeting to be convened by Legislative Speaker You Si-kun （游錫?）, the sources said.

The legislative session is to end on May 31.