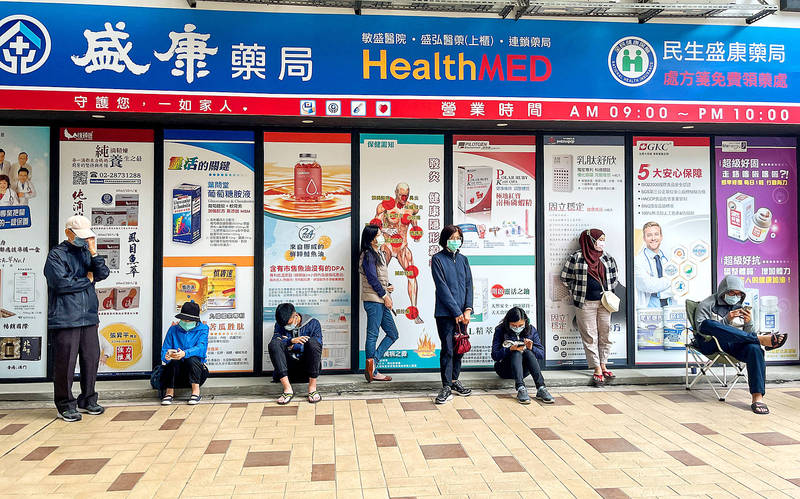 Up to now, only people who have tested positive using the more reliable, but also more time-consuming polymerase chain reaction （PCR） test have been counted as confirmed cases, but the new policy could be launched in the next few weeks, said Chen, who heads the Central Epidemic Command Center （CECC）.

Introduction of the policy is dependent on administrative procedures and expert opinions, but discussions have almost reached a conclusion, Chen said.

With COVID-19 cases surging to the tens of thousands per day, Taiwan’s PCR testing capacity has been challenged, especially in the north, where the outbreak has been more severe, he said.

That has led to the introduction of rapid tests, so people who have COVID-19-like symptoms or have been in contact with confirmed cases can use them rather than a PCR test to quickly determine whether they have the disease.

However, rapid tests are in short supply and are being rationed by the government, with the system drawing criticism from opposition parties over its cost and efficiency.

Chinese Nationalist Party （KMT） legislators have said that rapid test kits in other countries usually cost the equivalent of NT$40 to NT$50 per unit, but those in the government program cost NT$100 per unit.

The prices of rapid tests differ depending on the brand, Chen said.

For example, the prices of Roche Diagnostics and Abbott test kits are both NT$100 per unit in the rationing scheme, while the Roche kits are sold overseas for the equivalent of NT$166 to NT$380, and Abbott kits for NT$111 to NT$405 in Germany, Japan, Singapore, Thailand and the US, he said.

The KMT said that the CECC should provide rapid test kits free of charge.

Deputy KMT Secretary-General Wang Yu-min （王育敏） told a news conference that in the US, 500 million COVID-19 rapid screening kits were distributed to the public, while the UK lets people apply for two rapid tests per week, but Taiwan charges NT$100 per test.

It seems that the UK and the US governments are stronger than Taiwan’s, which is making money off the public, Wang said.

Even in Hong Kong and France, the price of a rapid test is less than the equivalent of NT$100, Wang said, calling that “an indisputable fact.”

“Why can the CECC not provide free rapid tests rather than having people line up to buy them?” she asked.

“At this point, with the COVID-19 epidemic so severe, the government should give free tests so that Taiwanese will not feel anxious,” she said, adding that the CECC should boost the availability of rapid tests as soon as possible.

Minister of Economic Affairs Wang Mei-hua （王美花） said that the prices of the Roche and Abbott brand tests in the government’s rationing system are lower than the same products elsewhere.

The cheaper tests reported in the media were all from China, she said, citing information from Taiwan’s diplomatic missions abroad.

Additional reporting by By Lee I-chia