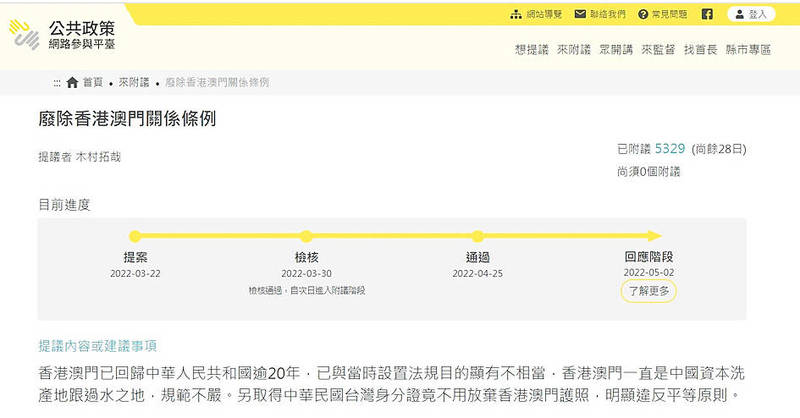 A petition to abolish the Laws and Regulations Regarding Hong Kong and Macau Affairs （香港澳門關係條例） has passed review and the threshold of 5,000 signatures, the petition sponsor said yesterday.

According to law, the Mainland Affairs Council （MAC） — which is the competent authority on Hong Kong, Macau and related legislation — must respond to the petition launched on the Public Policy Online Participation Platform within two months.

“Hong Kong and Macau reverted to People’s Republic of China administration over 20 years ago, and the circumstances in the territories now no longer accord with the original intent of the law concerning them,” the sponsor said. “Hong Kong and Macau have long been places where Chinese Communist Party （CCP） officials launder money, and the law does not deal with that strictly enough.”

The proposal demands that the same laws applied to China be applied to the two territories, and that residents of the territories — who are currently able to immigrate to Taiwan without giving up their Chinese citizenship — be treated the same as foreigners from other countries for the purpose of immigration.

It argues that allowing special treatment for those from the two territories has also become a loophole for CCP spies to operate unfettered in Taiwan.

Those responding in support of the petition in the comments section on the platform echoed concerns about Chinese espionage and about policies being stricter for other foreigners than for residents of the two territories.

One user wrote that Taiwan should continue to show support for the people of Hong Kong and Macau, but in a way that does not compromise Taiwan’s security or its values.

In response to the petition reaching the required threshold, the MAC yesterday said it would follow relevant regulations and procedures.

One government official who spoke on condition of anonymity said that issues related to national security and cross-strait affairs had never been brought up in a petition before, and that the petition’s passing of the threshold had caught officials by surprise.