《TAIPEI TIMES》 Quarantine to be shorter for arrivals 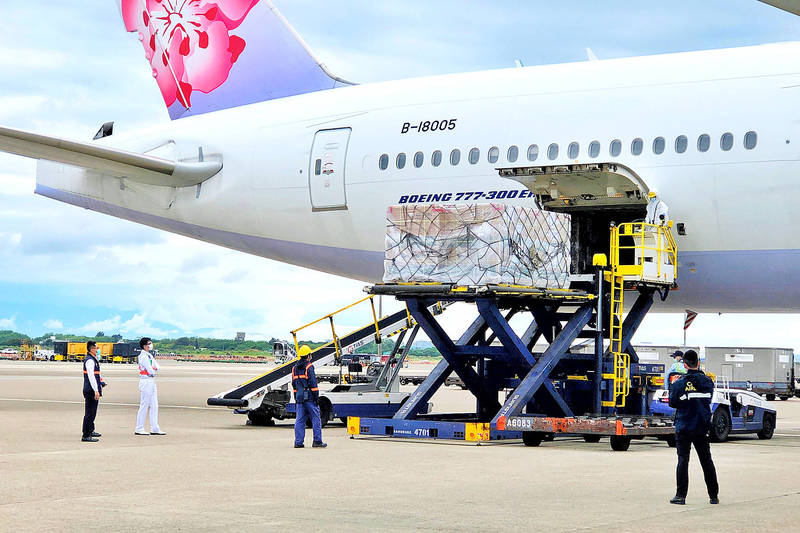 A batch of more than 1 million doses of the Moderna COVID-19 vaccine purchased by Taiwan is unloaded at Taiwan Taoyuan International Airport yesterday. Photo: CNA

NOT FINALIZED: Minister of Health and Welfare Chen Shih-chung said dropping isolation in June for people with a booster and a negative result is being discussed

Starting next week, the mandatory home quarantine for inbound travelers is to be shortened to seven days, followed by seven days of self-health management, the Central Epidemic Command Center （CECC） said yesterday.

Minister of Health and Welfare Chen Shih-chung （陳時中）, who heads the center, said that travelers on flights arriving in Taiwan after 12am on Monday would need to quarantine at home for seven days, not 10 days.

People in quarantine would need to be tested for COVID-19 twice: a polymerase chain reaction （PCR） test at the airport upon their arrival （day zero） and a rapid COVID-19 test on the day of their release from quarantine （day 7）, Chen said.

If symptoms arise during quarantine, the traveler should conduct a rapid test and report to their local health department if the result is positive, he said.

The quarantine principle is still “one person per household,” and if the requirement cannot be met, the inbound traveler should quarantine at a hotel for seven days, he added.

Two at-home rapid test kits are provided to inbound travelers at the airport: one for the final required test and one in the case of symptoms, the center said.

Only PCR tests should be used for quarantined infants under the age of two, it said.

People can ask local authorities for assistance if they have trouble conducting a rapid test.

Chen said the center should consider exempting people from isolation if they have received a booster shot and can provide a negative result to a rapid COVID-19 test.

He made the comment after being asked to confirm a Mirror Media magazine report about a plan to drop the home isolation policy from next month if the percentage of Taiwanese with a booster shot rises, and COVID-19 cases with severe complications and deaths remain low.

“Similar plans are being discussed, but many factors continue to change — so I will announce plans when they have been finalized,” Chen said.

Separately, National Taiwan University College of Public Health professor Chan Chang-chuan （詹長權） on Monday wrote that the average incidence rate of COVID-19 in Taiwan over the past week was about 387 per million, comparable to the nation’s main trading partners （between two and 415 per million） and that the number of new domestic cases was 46 to 113 times the number of imported cases on a given day.

As Taiwan relies heavily on global trade and international exchanges, and the government is transitioning toward living with the virus, border controls should be revised, he said, adding that the quarantine measures for confirmed cases and their close contacts should be similar.

Chan said that officials should consider the methods adopted by countries that have reopened their borders by first easing restrictions on foreign travelers with a booster shot and a negative test result.

《TAIPEI TIMES》 Over 10 percent of Taiwanese…