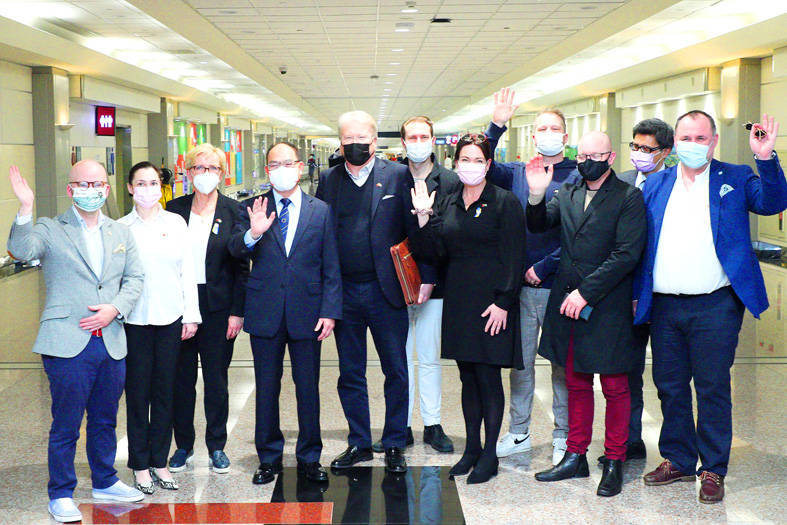 Members of a Swedish parliamentary delegation pose for a photograph after arriving at Taiwan Taoyuan International Airport on April 10. Photo: EPA-EFE / Ministry of Foreign Affairs

SUPPORT: By changing the name, lawmakers hope to underscore that Taiwan should be seen as a nation and not a province of China, Markus Wiechel said

Swedish lawmakers have proposed a motion to have a building in Taiwan similar to the House of Sweden in Washington, with the motion expected to be debated and voted on soon, the Ministry of Foreign Affairs said yesterday.

The idea was first mentioned on April 14 during a five-day visit to Taiwan by a Swedish delegation.

The House of Sweden building in Washington is evocative of the climate of Sweden and its political transparency. In addition to being the Swedish embassy, the building also houses the embassies of Iceland and Liechtenstein, as well as Swedish companies.

The delegation said it would propose changing the name of Sweden’s representative office in Taipei, the Swedish Trade and Invest Council, to the House of Sweden to symbolize an expanded range of diplomatic work in Taiwan, Department of European Affairs Director Remus Chen （陳立國） said yesterday.

Swedish Parliament Deputy Speaker Kerstin Lundgren on April 14 told reporters in Taipei that she had been one of the lawmakers who initiated the motion, adding that it has received the support of a majority of lawmakers on the Riksdag’s Foreign Affairs Committee.

While the Swedish government has the final say, the Swedish parliament hopes to express its support for Taiwan through this gesture, Lundgren said.

By changing the name to the House of Sweden, we hope to underscore that Taiwan should be seen as a sovereign nation and not a province of China, Swedish lawmaker Markus Wiechel said at the time.

Meanwhile, the ministry declined to comment on whether Slovenian Prime Minister Janez Jansa’s defeat in elections on Sunday would impact a reported plan to open reciprocal representative offices.

Asked if the ouster of Jansa could jeopardize the reported talks, Chen did not directly answer the question, saying only that Taiwan had congratulated Slovenia on holding a “peaceful election through a democratic process.”

“The government is ready to deepen its cooperation with the new Slovenian government on various fronts and across party lines to pursue mutually beneficial relationships,” he said, without elaborating.

In Sunday’s elections, the ruling Slovenian Democratic Party, led by Jansa, was defeated by Robert Golob and his Freedom Movement party.

Jansa has visited Taiwan on four occasions and he founded the Slovenia-Taiwan Parliamentarian Friendship Association.