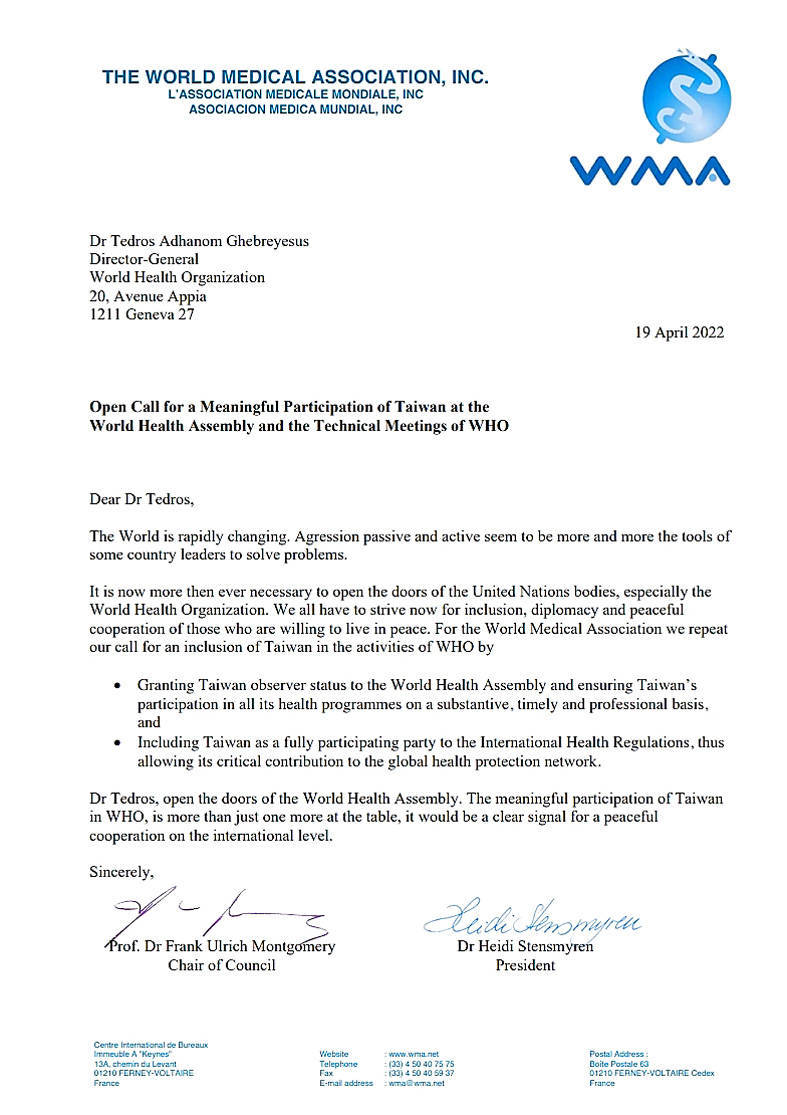 PEACEFUL COOPERATION: The World Medical Association urged the WHO to grant Taiwan observer status at the WHA and participation in all WHO health programs

The World Medical Association （WMA） has called on WHO Director-General Tedros Adhanom Ghebreyesus to facilitate the meaningful participation of Taiwan at the World Health Assembly （WHA）.

The WHA, the decisionmaking body of the WHO, is to hold its annual meeting in Geneva, Switzerland, from May 22 to 28.

The WMA General Assembly in October last year voted 91-16 in favor of a resolution supporting Taiwan’s participation in all WHO health programs and the WHA.

“We all have to strive now for inclusion, diplomacy and peaceful cooperation of those who are willing to live in peace,” the WMA said in an open letter dated Tuesday to Ghebreyesus.

Taiwan’s meaningful participation in the WHO “would be a clear signal for a peaceful cooperation on the international level,” the WMA said.

The WHO should grant “Taiwan observer status to the World Health Assembly, ensuring Taiwan’s participation in all its health programs on a substantive, timely and professional basis,” it said.

The WMA said that Taiwan should be included “as a fully participating party to the International Health Regulations, thus allowing its critical contribution to the global health protection network.”

Sending the letter to Ghebreyesus was not at the request of the Taiwan Medical Association （TMA）, but an initiative taken by the WMA, Democratic Progressive Party Legislator and TMA president Chiu Tai-yuan （邱泰源） said.

“We have to be very careful,” Chiu said, warning against Beijing’s increasing hostility toward Taiwan.

China has insisted on having three representatives in the WMA, instead of one, Chiu said, adding that resolutions critical of China are rarely passed.

However, the letter is crucial to inspiring people and gathering support, which might open the door to people’s right to health being protected, Chiu said yesterday.

The government is formulating a proposal for participation in the WHA this year, she said, adding that details would be announced.

Ou said that the COVID-19 pandemic has underlined the importance and urgency of Taiwan’s participation in the WHO, with many countries voicing their support.

Taiwan’s allies and other like-minded countries have backed Taiwan’s participation in the WHO through speeches and written statements, she added.

In a statement in February, the UK and Australia reiterated their support for Taiwan’s meaningful participation in international organizations, Ou said.

The logo of the WHO is pictured next to its headquarters in Geneva, Switzerland, on April 24, 2020. Photo: AFP