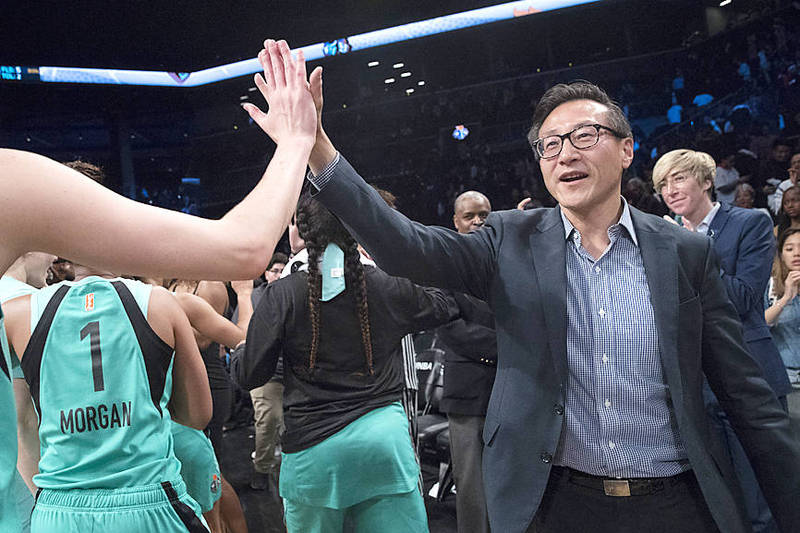 OUT OF PATIENCE: It is becoming clear that democratic values are more vital than economic interests, especially following Russia’s invasion of Ukraine, an academic said

Western nations are beginning to push back on moneyed interests espousing authoritarian values within their borders, as shown in a recent ESPN expose of Brooklyn Nets owner Joe Tsai （蔡崇信）, Taiwanese commentators said this weekend.

The US sports news organization on Thursday published a feature on Tsai, a Taipei-born billionaire and cofounder of Chinese e-commerce giant Alibaba.

Calling him “the face of [the] NBA’s uneasy China relationship,” ESPN detailed his links to China’s techno-authoritarian expansion through Alibaba and his defense of controversial policies in Hong Kong and Xinjiang.

It also investigated his role as a mediator for Chinese interests in the US, particularly in the maelstrom following a 2019 post on Twitter by then-Houston Rockets general manager Daryl Morey in support of Hong Kong protesters.

While publicly accusing Morey of “supporting a separatist movement,” Tsai was himself accused of pushing for the NBA to fire Morey in “part of a behind-the-scenes drama that reached the White House and has not been previously disclosed,” ESPN reported.

After mounting pressure from Washington, NBA commissioner Adam Silver issued a statement affirming the league’s commitment to freedom of expression, and Morey did not face any punishment.

To Taiwanese commentators, the report exposes declining patience within the US and other Western democracies for financial interests superseding human rights.

Yen Chien-fa （顏建發）, a professor of business administration at Chien Hsin University of Science and Technology, on Saturday said it is becoming clear that “democratic values are more important” than economic interests, especially in the wake of Russia’s invasion of Ukraine.

Yen also pointed to Tesla founder Elon Musk’s recent criticism of Twitter for prioritizing money over free speech. Musk said the platform must be taken private to realize “its potential to be the platform for free speech around the globe.”

There has also been a business exodus from China over human rights concerns in Xinjiang and Hong Kong, Yen said.

Tsai is facing an investigation over his alleged ties to rights abuses, as universal values increasingly become the standard for evaluating business interests, he said.

What Taiwan needs is someone to fight back, Yen said.

Growing criticism of Tsai would reverberate in Taiwan as the trend that began in the US spreads to other countries, he said.