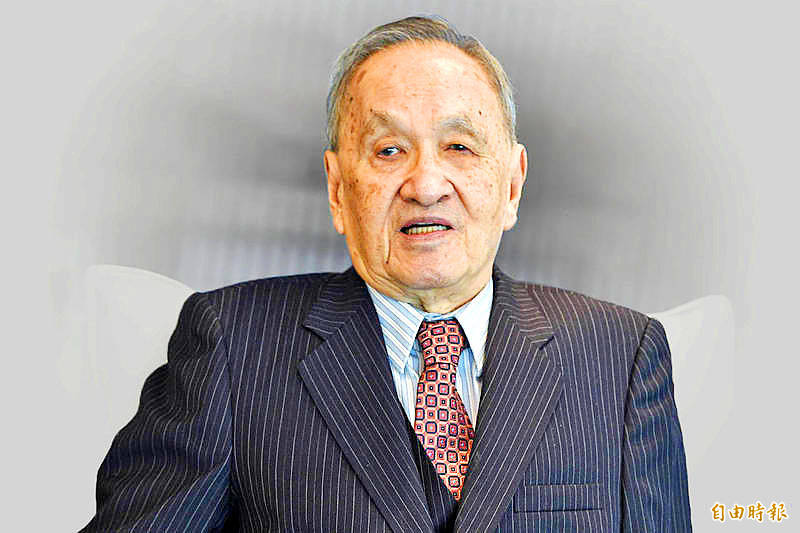 ‘SPIRITUAL LEADER’: Peng lived in exile abroad for his pro-democracy writings, before retuning in the 1990s and running as the DPP’s first presidential candidate in 1996

By Huang Chia-lin and Liu Tzu-hsuan / Staff reporter, with staff writer and CNA

Taiwanese democracy pioneer Peng Ming-min （彭明敏）, whose advocacy helped the nation transition from an authoritarian state, died yesterday morning at the age of 98.

In announcing his passing on Facebook, the Peng Foundation for Culture and Education said there would be no public funeral, and that Peng would be cremated and interred at the Yanguang Cemetery in Kaohsiung’s Daliao District （大寮）.

Presidential Office spokesman Xavier Chang （張惇涵） yesterday said that President Tsai Ing-wen （蔡英文） was saddened by the news, describing Peng as not only a renowned legal academic, but also a trailblazer in Taiwan’s democracy movement.

Born in Taichung in August 1923, Peng graduated from National Taiwan University （NTU） in 1948 with a bachelor’s degree in political science.

He earned master’s and doctoral degrees in law from McGill University in Canada in 1953 and the University of Paris in 1954 respectively. After finishing his studies in France, he returned to teach at NTU.

In the early 1960s, the then-Chinese Nationalist Party （KMT） regime tried to groom him to become a government official, but he instead became an outspoken democracy advocate.

The document called Chiang Kai-shek’s （蔣介石） dream of “retaking the mainland” unattainable, and advocated for “one Taiwan, one China,” a new constitution, joining the UN as “Taiwan” and creating a free nation.

Peng was arrested over the manifesto and convicted of sedition. While under house arrest, he escaped to Sweden in 1970 and remained in exile for more than two decades. It was during that time he established the Formosan Association for Public Affairs in the US and lobbied for the end of martial law in Taiwan.

Peng returned to Taiwan in 1992 and launched his foundation, dedicated to promoting Taiwanese culture, and in 1996, he ran as the Democratic Progressive Party’s （DPP） first presidential candidate on a ticket with Frank Hsieh （謝長廷）, now representative to Japan.

In 2000, Peng was a senior adviser to then-president Chen Shui-bian （陳水扁）.

DPP Legislator Chen Ting-fei （陳亭妃） called Peng’s life “a history book on Taiwan’s democracy,” saying he was “a spiritual leader of Taiwan’s independence movement,” and that Peng’s faith would remain in the nation and in the minds of all Taiwanese.