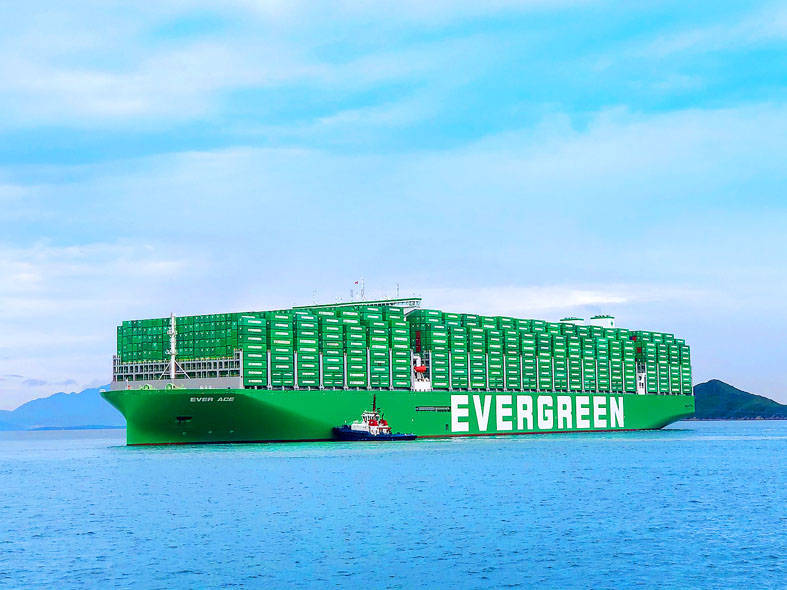 An Evergreen container ship is pictured in an undated photograph. Photo courtesy of Evergreen Marine Corp

China State Shipbuilding Corp （CSSC, 中國船舶集團有限公司） is a key producer of vessels for the rapidly expanding Chinese People’s Liberation Army Navy, and is thought to be building its third aircraft carrier.

Taiwan’s Evergreen Marine Corp （長榮海運） has purchased 44 vessels from China since 2018, all but two of which were ordered from shipyards that produce Chinese warships, including CSSC, the Center for Strategic and International Studies said in a report.

The Washington-based think tank said foreign companies in France and other US-allied countries also buy ships from CSSC, which the US has placed on an investment blacklist for US citizens and companies due to its Chinese military links.

The center said that while there is limited transparency on the flow of foreign capital in China’s shipbuilding industry, “available evidence indicates that profits from foreign orders are likely lowering the costs of upgrading China’s navy.”

It called the foreign contracts “a tangible threat to national security” for some democracies in the region, and said companies should consider US allies South Korea and Japan as alternative shipbuilding partners.

Evergreen vessels have also been docked next to Chinese navy cruisers and destroyers, it said.

The imagery “suggests there is direct sharing of resources between military and civilian operations at China’s key shipyards,” the center said.

Evergreen said in a statement that all of its container ship projects undergo international bidding, and that its contracts with CSSC’s commercial shipbuilding department were “completely different and separate” from CSSC’s military department.

“We believe the civil commercial ship building activities have nothing to do with national naval projects,” it said, adding that it discloses information about its orders to investors and authorities.

China already has the world’s largest navy, with a greater number of warships and submarines than the US.