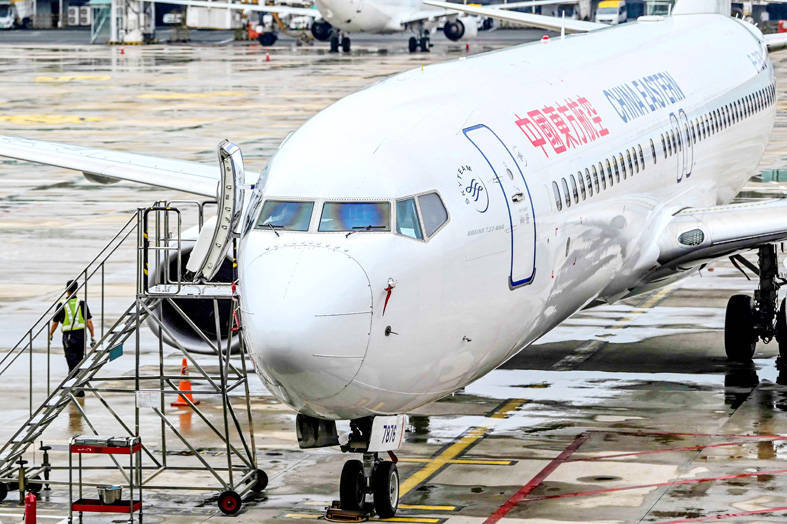 A China Eastern Airlines Boeing 737-800 aircraft awaits passengers at the Wuhan Tianhe International Airport in China on May 29, 2020. Photo: AFP

NO SIGN OF LIFE: The Mainland Affairs Council said it is monitoring developments and has asked Chinese authorities to verify if any Taiwanese passengers were on board

A China Eastern Airlines Boeing 737-800 with 132 people on board yesterday crashed in mountains in southern China on a domestic flight following a sudden descent from cruising altitude.

Media reports said there was no sign of survivors, and the airline said it deeply mourned the passengers and crew who had died.

The plane was flying from the southwestern city of Kunming to Guangzhou, bordering Hong Kong.

China Eastern said the cause of the crash — in which the plane descended at a final rate of 9,450 meters per minute, according to flight tracking Web site FlightRadar24 — is under investigation.

The airline said it has provided a hotline for relatives of those on board and sent a working group to the site.

The aircraft, with 123 passengers and nine crew on board, lost contact over the city of Wuzhou, the Chinese Civil Aviation Administration and the airline said.

The flight left Kunming at 1:11pm and had been due to land in Guangzhou at 3:05pm.

Crashes during the cruise phase of flight are relatively rare, although it accounts for most of the flight time.

Online weather data showed partly cloudy conditions with good visibility in Wuzhou at the time of the crash.

A Boeing spokesperson said: “We are aware of the initial media reports and are working to gather more information.”

China Eastern grounded its fleet of 737-800 planes after the crash, media reports said.

The Mainland Affairs Council in a statement yesterday evening expressed its condolences over the crash, and asked Chinese authorities to verify if any Taiwanese passengers were on board.

The council said it is closely monitoring developments through channels such as the Straits Exchange Foundation and the Civil Aviation Administration, and has offered assistance.

A reporter from the Liberty Times （sister paper of the Taipei Times） called the airline’s Taiwan branch to ask whether any Taiwanese passengers were on board, but was told by a sales manager that he had no information and that it was “inconvenient to respond.”

A China Eastern Boeing 737-800 with 132 people on board crashes in Chinese province of Guangxi. Some villagers see the crash sparking off forest fire. Photo: Screen grab from Sina Weibo