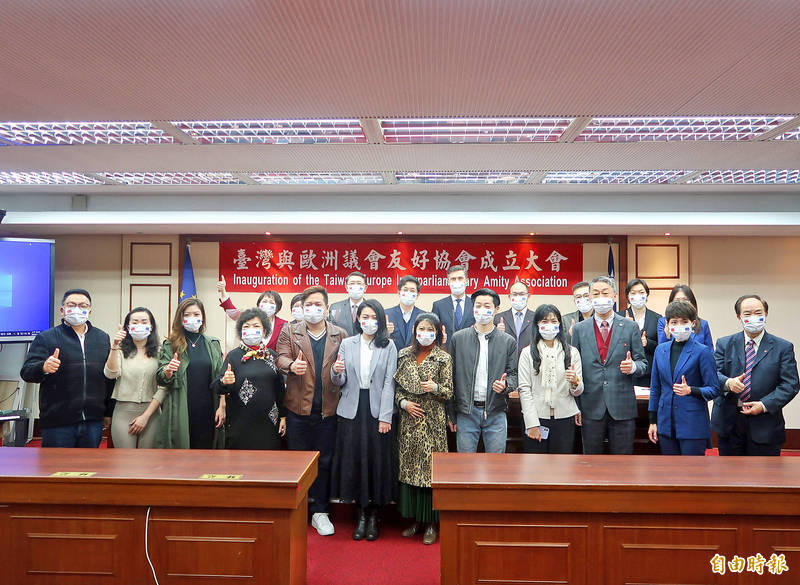 Officials and lawmakers attending the inauguration of the Taiwan-Europe Interparliamentary Amity Association pose for a photograph at the Legislative Yuan in Taipei yesterday. Photo: Lu Yi-hsuan, Taipei Times

The Taiwan-Europe Interparliamentary Amity Association was inaugurated yesterday, with legislators praising strides made toward closer relations and an invitation for the association chair to visit the European Parliament once the COVID-19 pandemic subsides.

Dozens of officials and lawmakers attended the event online and in person at the legislature in Taipei.

In an address, Democratic Progressive Party Legislator Tsai Shih-ying （蔡適應）, who since 2016 has served as chairman of the Taiwan-Europe Parliamentary Friendship Association and in 2019 led a delegation to Europe, celebrated the “leaps and bounds” Taiwan-Europe relations have taken and their promising trajectory.

Although many events have been canceled over the past two years due to the pandemic, Taiwan and Europe have still supported each other through donations of masks and vaccines, Tsai said.

The G7 in June last year declared the importance of stability in the Taiwan Strait, followed by a European Parliament resolution in October calling for closer political relations and cooperation, and the first formal visit to Taiwan by European lawmakers in November, he said.

Taiwan and Europe share the common values of democracy, freedom, human rights and the rule of law, Tsai said, expressing the hope that relations would continue to be enhanced across more areas.

European Parliament-Taiwan Friendship Group chairman Michael Gahler in a prerecorded address offered his congratulations and extended an invitation to Tsai to visit the European Parliament when the pandemic eases or to meet in Taiwan.

Group vice chairman Andrey Kovatchev touted the past year’s achievements as a solid foundation for further development, while vowing to keep pushing for a bilateral investment agreement.

Group vice chairman Juan Fernando Lopez Aguilar said that Taiwan has many friends in Europe who support the nation’s meaningful international participation, and respect its liberal and democratic values.

Group members would therefore continue to call on the EU, Japan, India, New Zealand, Australia and others to stand together in opposition against Chinese aggression toward Taiwan, he said.

At the legislature, European Economic and Trade Office in Taiwan Director Filip Grzegorzewski attested to Taiwan’s importance as a trusted partner in the Indo-Pacific region with shared values and goals.