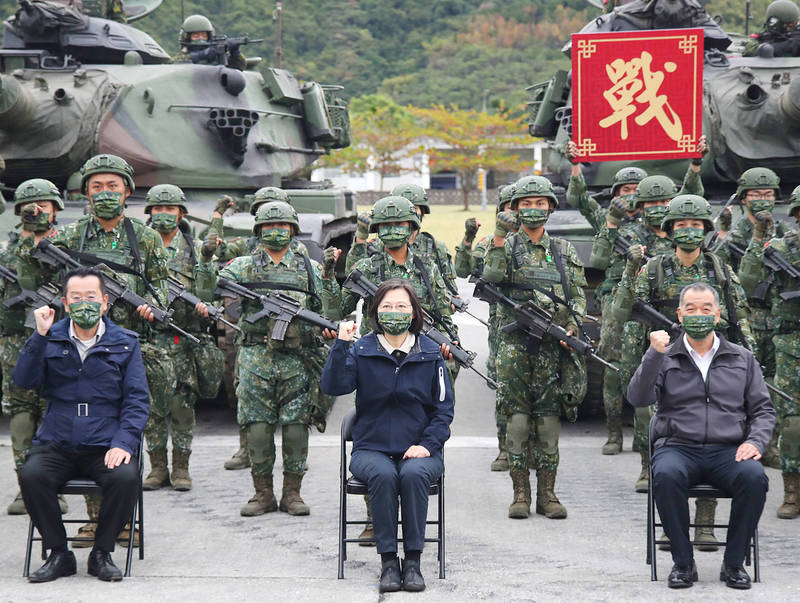 From front left, National Security Council Secretary-General Wellington Koo, President Tsai Ing-wen and Minister of National Defense Chiu Kuo-cheng pose for a photograph at an inspection of a military base in Taitung County yesterday. Photo: CNA

TOP SHELF: The high-tech ejection seats, to be installed in 43 F-5s by the end of the year, have advanced safety features such as a personal survival pack, the air force said

The air force yesterday showcased its new F-5 ejection seats in a Seventh Flight Training Wing jet at a Taitung County air force base during a visit by President Tsai Ing-wen （蔡英文）.

Taiwan ordered 70 Martin-Baker Mk 16 ejection seats from the US for the air force’s F-5 fleet in March last year after military experts recommended replacing the previous models, which they said used an outdated design.

The recommendation was made during an investigation into the cause of a mid-air collision of two F-5E jets in March last year that left two pilots dead.

The first batch of the ejection seats was received late last year, and the F-5 on display yesterday was one of the first aircraft to be refitted with one.

The Mk 16 is a high-tech ejection seat that comes with advanced safety features such as a personal survival pack and is compatible with many canopy jettison systems, the air force said.

It uses a passive leg restraint system that can automatically retract the pilot’s lower limbs and provide protection during ejection, and enables pilots to eject safely even at zero altitude and zero velocity, the air force said.

When the seat makes contact with water, it automatically detaches the harness from the seat’s parachute to prevent the pilot from drowning, the air force added.

Tsai was there as part of a tour of military bases ahead of the Lunar New Year holiday, which begins at the end of the month.