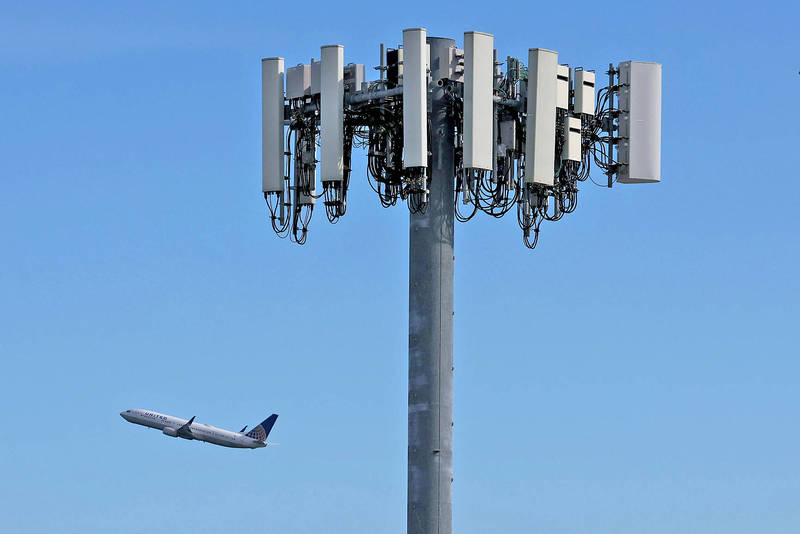 A United Airlines plane takes off from San Francisco International Airport beyond a cellular tower in California on Tuesday. Photo: AFP

ROLLOUT OF 5G: A flight from San Francisco to Taiwan was to land early today after US authorities and Boeing said 5G signals could potentially affect communications

Taiwan’s two biggest international airlines yesterday announced changes to their flight schedules to and from the US in response to the launch of 5G telecommunications services there.

The schedule adjustments by China Airlines （CAL 中華航空） and EVA Airways （長榮航空） aim to avoid possible technical disruptions resulting from the rollout of 5G services in the US, the carriers said.

CAL said that its decision to bring forward by four hours the scheduled departure of a flight from San Francisco to Taiwan yesterday followed guidelines released by the US Federal Aviation Administration （FAA） and aircraft maker Boeing Co to avoid potential interruptions from 5G signals.

As a result, Flight CI003 was to arrive at Taiwan Taoyuan International Airport at about 1am this morning instead at 5am as originally scheduled, CAL said.

EVA Air said that it delayed departures of two flights from Taoyuan yesterday by three hours, one bound for Los Angeles and the other bound for New York, and it was waiting for further instructions from the FAA for possible further schedule adjustments.

EVA Air advised passengers to go to the airlines’ Web site or its EVA Mobile app to access the latest information on flight schedule updates.

The changes came after international media reported that the largest airlines in the US warned of disruptions to travel and shipping operations if telecoms started their 5G technology rollout as planned yesterday without limiting coverage near US airports.

The airlines said that the new C-band 5G service to be rolled out by Verizon and AT&T could render a significant number of wide-body aircraft unusable, and “could potentially strand tens of thousands of Americans overseas” and cause “chaos” for US flights.

In Taipei, the Civil Aeronautics Administration said the aircraft models used in Taiwan that could be affected by the 5G signals are the Boeing 777 and Boeing 787, so the two Taiwanese carriers adjusted their schedules to avoid disruptions.

The schedule of flight departures from today were unchanged, but are subject to technology guidelines from the FAA, the CAA said.

The FAA in a statement released on Monday sought to assuage concerns about the impact of the 5G rollout on aviation without offering any concrete next steps, saying only: “With safety as its core mission, the FAA will continue to ensure that the traveling public is safe as wireless companies deploy 5G,” telecom news firm Tech Xplore reported.

“The FAA continues to work with the aviation industry and wireless companies to try to limit 5G-related flight delays and cancelations,” Tech Xlpore cited the FAA as saying.

The world’s largest operator of the Boeing 777, Dubai’s Emirates, said it would suspend flights to nine US destinations from yesterday.

Emirates flights to New York’s JFK, Los Angeles and Washington would continue to operate, it said.

ANA said it was canceling or changing the aircraft used on some US flights.

Seoul-based Korean Air Lines said it had switched away from 777s and 747-8s on six US passenger and cargo flights, while Hong Kong’s Cathay Pacific Airways said it would deploy different aircraft types if needed.