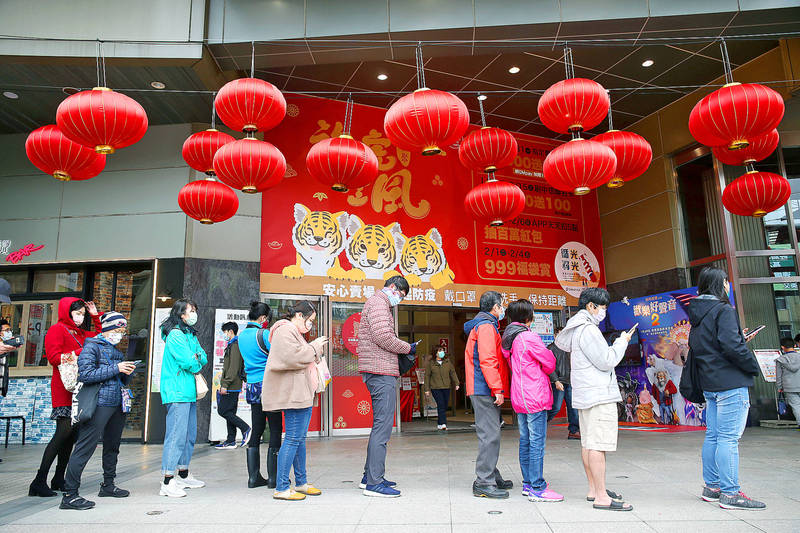 TRACING UNDER WAY: The CECC has identified six transmission chains among 25 recently confirmed COVID-19 cases, including those linked to a restaurant and a bank

Of the local cases, seven are associated with a cluster infection at a Tasty Steak （西堤牛排） outlet in Taoyuan’s Zhongli District （中壢）, one is linked to a family of four with COVID-19 reported on Monday, one is a family member of an infected nurse at Far Eastern Memorial Hospital in New Taipei City’s Banciao District （板橋） and one is a vendor at Danan Market （大湳市場） in Taoyuan, he said.

Chen said that five of the cases linked to the steakhouse include two classmates of an infected child — case No. 18,053 — who ate at the restaurant with his family on Jan. 9, as well as the parents and a sister of one of the classmates.

One of the two other cases linked to the restaurant cluster is a man in his 60s, who visited the venue on Jan. 7. Six among his family of seven who went to the restaurant with him have tested positive, Chen said.

The last case is a child who visited the restaurant on Jan. 9 with her mother, he said.

The CECC on Monday reported a cluster infection with an unclear infection source among a family of four in Hsinchu.

Chen yesterday said a new case — No. 18,082 — is a friend of the parents and they had a meal together on Tuesday last week.

He said contact tracing found that case No. 18,082 had visited the same place at about the same time on Jan. 9 as an infected employee at the Zhongli branch of the Union Bank of Taiwan.

Eighteen bank employees have so far tested positive for COVID-19.

Testing and contact tracing would be conducted to further clarify whether the infected family of four might have contracted the disease from case No. 18,082, Chen added.

The son of an infected nurse at Far Eastern Memorial Hospital — case No. 17,967 — also tested positive, he said.

The nurse was infected with the Omicron variant of SARS-CoV-2, but the virus strain is not the same as in other local cluster infections, and is similar to strains found in cases imported from Europe or the US, Chen said.

The center is awaiting a complete genome sequencing result for further analysis, he said.

Contact tracing has found no links between her and the clusters at Taiwan Taoyuan International Airport, the bank or the restaurant, he said.

Six transmission chains have so far been found among the recent infections, Lo said.

《TAIPEI TIMES》 Alternative sought after US …