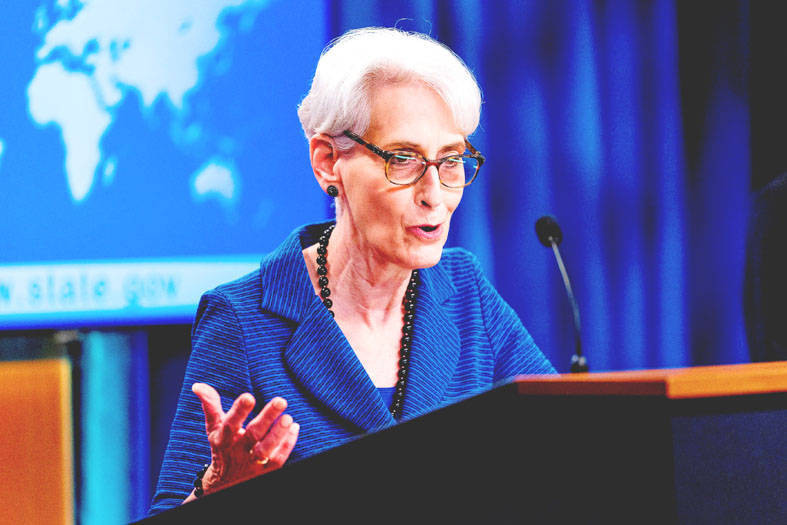 US and EU officials on Thursday expressed “strong concern” over China’s actions in the Taiwan Strait and the Indo-Pacific region, saying that they directly affect the security and prosperity of the US and the EU.

The remarks came at a meeting in Washington between US Deputy Secretary of State Wendy Sherman and European External Action Service Secretary General Stefano Sannino, where they discussed relations with China and challenges posed by Beijing.

The two officials expressed “strong concern over China’s problematic and unilateral actions in the South and East China seas, and the Taiwan Strait,” a statement released by the US Department of State said.

China’s actions “undermine peace and security in the region and have a direct impact on the security and prosperity of both the United States and European Union,” the statement cites the officials as saying.

Since President Tsai Ing-wen （蔡英文） took office in 2016, Beijing has ramped up economic, diplomatic and military pressure on Taiwan. Since 2019, it has repeatedly sent military aircraft into Taiwan’s air defense identification zone （ADIZ）.

The Ministry of National Defense in October said that 680 Chinese military aircraft had this year entered Taiwan’s ADIZ, including a record 149 sorties in just four days at the start of the month.

The two officials also reaffirmed the importance of upholding and promoting freedom of navigation and overflight, and expressed their readiness to deepen bilateral information sharing on disinformation sponsored or supported by China, the statement said.

They highlighted human rights abuses in China that “breach international law” and run counter to their shared values and interests, it said.

The two officials recognized the importance of diplomacy with Beijing, and the US and EU would seek cooperation with China where possible, and “manage our competition and systemic rivalry with China responsibly,” it said.

The meeting was the second US-EU Dialogue on China since the two sides relaunched the framework in March to discuss their respective approach to dealing with Beijing, and engagement and partnerships in the Indo-Pacific region.