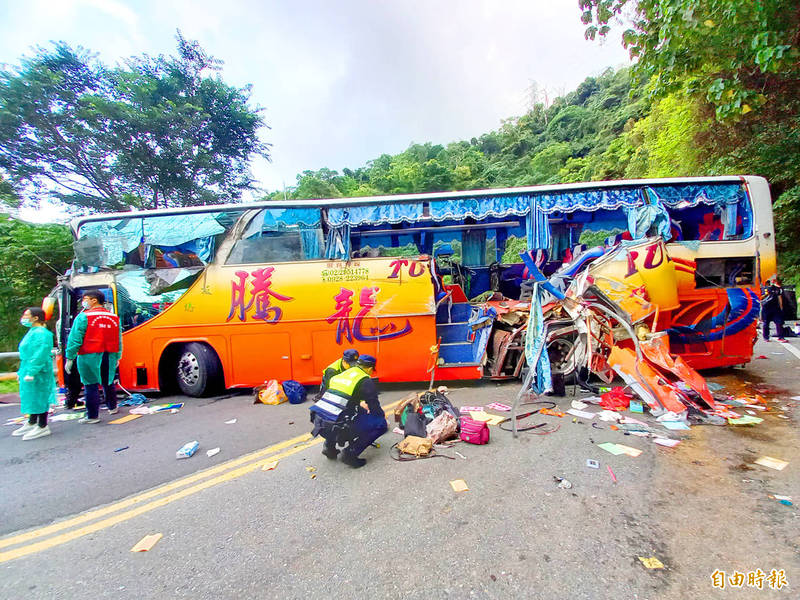 A tour bus is pictured after a crash in Yilan County’s Suao Township on March 16. Photo: Chiang Chih-hsiung, Taipei Times

Seatbelts are to be mandated for passengers on buses traveling on highways, expressways or freeways after lawmakers yesterday passed an amendment to Article 31 of the Road Traffic Management and Penalty Act （道路交通管理處罰條例）.

The amendment — which applies to passengers aged four or older and drivers — was proposed after a bus crashed into the side of a mountain on the Suhua Highway in Yilan County’s Suao Township （蘇澳） on March 16, killing six passengers and injuring 39.

Some of the passengers were thrown from the bus by the crash.

Prior to the amendment, the act only required passengers sitting next to the driver, near doors, including emergency exits, as well as those sitting in the last row to wear seatbelts.

The amendment stipulates that drivers would face a fine of NT$3,000 to NT$6,000 if passengers aged four or older fail to follow the seatbelt requirement.

However, drivers would not be fined if passengers have been adequately informed about the seatbelt requirement, the amendment says.

Instead, passengers would be fined if they do not wear a seatbelt after being told to, it says.

The amendment also requires the Ministry of Transportation and Communications to set a date for implementation of the regulations and demonstrate to the public the correct way to fasten a seatbelt on a bus.

Lawmakers also passed an amendment to Article 18-1 of the act to require large cargo trucks and large passenger buses to have lateral protection devices.

Before Article 18 was amended, it only required such vehicles to have dashboard cameras and auxiliary visual devices.

Lateral protection devices would prevent motorcyclists from being entangled in the wheels of large vehicles during collisions, said Chinese Nationalist Party （KMT） Legislator Hung Meng-kai （洪孟楷）, who proposed the amendment.

Following the amendment, all three devices must be installed on large cargo trucks and passenger buses, or drivers would be fined NT$12,000 to NT$24,000.

Drivers of commercial vehicles would be fined NT$9,000 to NT$12,000 if they fail to keep complete and accurate driving records, the amendment says.