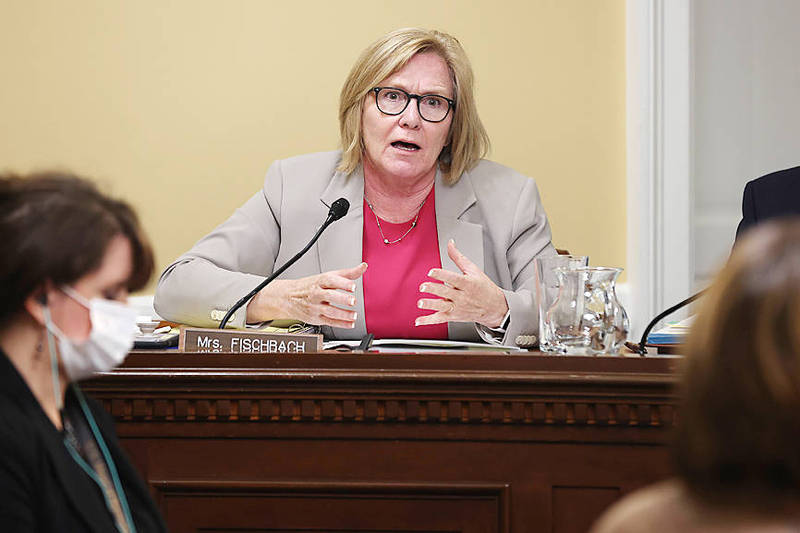 US Representative Michelle Fischbach speaks during a US House of Representatives hearing at the US Capitol in Washington on Sept. 20. Photo: AFP

Two US representatives on Tuesday introduced a bipartisan bill to the US House of Representatives to help Taiwan develop relations with other countries amid China’s coercive actions designed to isolate the nation.

The draft “Promoting Ties with Taiwan Act,” which was introduced by US representatives Michelle Fischbach and Scott Peters, would require the US government to use its diplomatic influence and reputation to help Taiwan expand connections with nations and partners around the world.

The bill would require the US secretary of state to develop a strategy to help Taiwan foster new ties and trade connections to prevent its isolation, the representatives said.

Within 180 days after the passage of the bill, the secretary of state would be required to submit a strategy to the US Congress, including an evaluation of staffing and other resources needed to implement the new policy, the bill says.

Within one year of the submission of the strategy, the secretary of state would have to submit a report to Congress detailing actions taken to carry out the strategy, it says.

The draft has won support from 13 representatives across party lines.

“Taiwan is a valued friend and an important trading partner for the United States. I’m proud to propose concrete steps that our government can take towards encouraging similar relationships between Taiwan and other countries around the world,” Fischbach said.

“Peace in the Taiwan Strait is an enduring security interest for the United States, Taiwan, allies and partners committed to a rules-based international order that promotes the prosperity and interests of all,” Peters said.

Taiwan — which has formal diplomatic ties with 15 nations, and economic and cultural missions in more than 50 nations — is increasingly isolated, as Beijing has succeeded in the past few years in pressuring several countries into switching diplomatic recognition from Taipei to Beijing, the representatives said.

Should Taiwan become isolated and weakened, it would be easy prey for a Chinese invasion, they added.

Lithuania in July announced that it would open a Taiwanese Representative Office in its capital and has since faced intensifying pressure from Beijing, including threats of economic sanctions, they added.

They hoped the bill would build on the foundation of the US’ Taiwan Allies International Protection and Enhancement Initiative Act, which was passed by Congress in 2019 and also aims to support Taiwan’s international presence, they said.

The new bill is being reviewed by the US House Committee on Foreign Affairs, and needs to be approved by the committee and Congress before it can be signed into law by the US president.

In related developments, the Chinese embassy in Lithuania has temporarily suspended consular services until further notice for “technical reasons,” the embassy on Thursday said in a statement on its Web site.

The statement was taken down shortly after publication.

It was published at 1:30pm GMT, a timestamp on the Web site showed, but had disappeared as of 2pm GMT.

The suspension came after Beijing on Sunday downgraded its diplomatic ties with the Baltic state, expressing strong dissatisfaction at the opening of the de facto Lithuanian embassy in Taiwan.