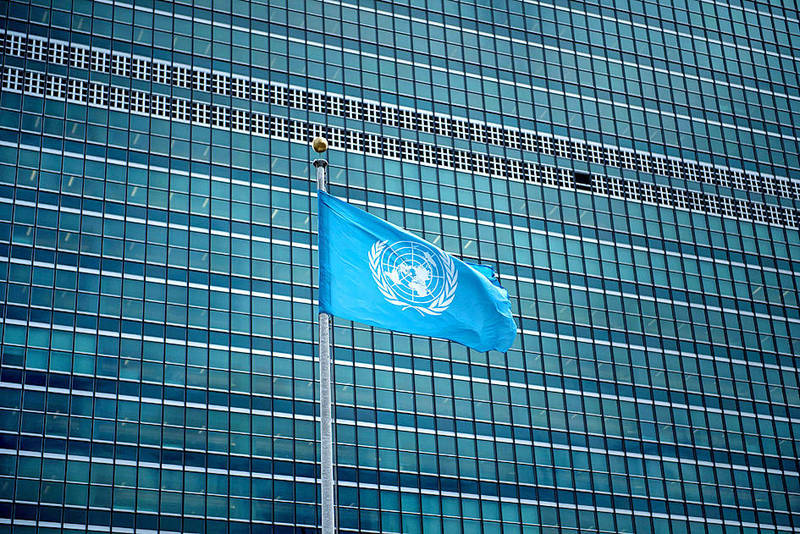 The UN headquarters is pictured during the 72nd session of the UN General Assembly in New York on Sept. 19, 2017. Photo: AFP

ADDRESSING CHALLENGES: A virtual meeting attended by Taiwanese and US officials focused on Taiwan’s meaningful participation at the UN, as well as in other global issues

Taiwan and the US on Friday held a high-level meeting on expanding Taiwan’s participation at the UN and other international organizations so that it could join efforts to tackle global challenges.

The virtual meeting, attended by officials from the Ministry of Foreign Affairs and the US Department of State, focused on helping Taiwan participate meaningfully at the UN.

The discussion also focused on bolstering Taiwan’s ability to use its expertise to address global challenges, including public health, the environment and climate change, as well as economic cooperation, according to news releases issued by both sides.

US officials reiterated Washington’s commitment to Taipei’s meaningful participation at the WHO and the UN Framework Convention on Climate Change, and discussed ways to highlight Taiwan’s ability to contribute on a wide range of issues, the department said.

They lauded the significant expansion this year of the Global Cooperation and Training Framework （GCTF）, demonstrating Taiwan’s willingness and capability to address global challenges through multilateral collaboration, it said.

The GCTF was launched by Taiwan and the US in June 2015 to help bring Taiwan’s expertise to the global stage and promote multilateralism, amid Beijing’s efforts to limit Taiwan’s international participation.

Japan joined the platform in 2019 as a full partner. Since then, a number of European countries, as well as Australia, have also participated in GCTF events.

During the virtual meeting, Ministry of Foreign Affairs Secretary General Lily Hsu （徐儷文） expressed gratitude for the US’ long-term support of Taiwan, adding that the government would continue to contribute to the international community in a professional and practical manner.

Taiwan, officially called the Republic of China, left the UN in 1971 when the People’s Republic of China took its place, and has since been excluded from the UN General Assembly and the organization’s special agencies.

Beijing has ramped up pressure on the UN and its affiliated agencies to prevent Taiwan’s participation in the global body, citing UN Resolution 2758.

In the resolution, adopted on Oct. 25, 1971, the UN General Assembly decided to “expel forthwith the representatives of [then-president] Chiang Kai-shek （蔣介石） from the place which they unlawfully occupy at the United Nations and in all the organizations related to it.”

Waters, during a virtual talk hosted by the German Marshall Fund of the United States, said Beijing has inaccurately interpreted the resolution to exclude Taiwan from playing a role at the UN and its affiliates.

Wang echoed the view, saying on Thursday that it is “actually a perfect textbook example of how China uses its influence to exert its will over the UN system.”