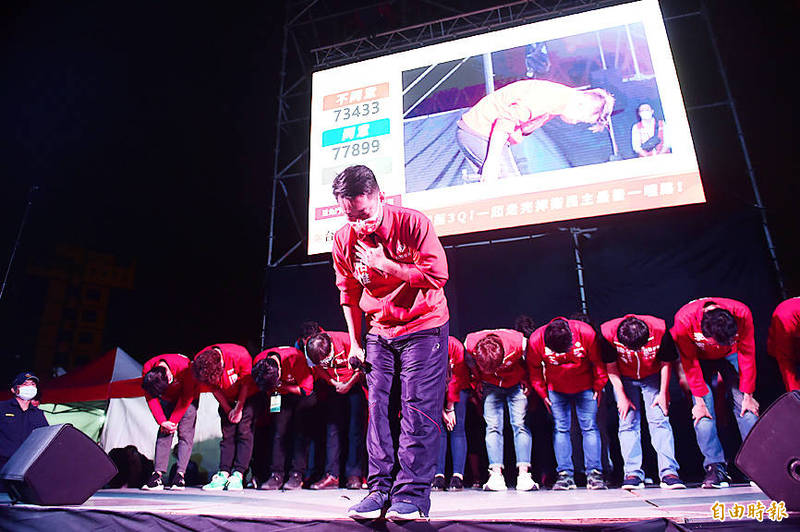 DOWN, NOT OUT: The election was not a total defeat, as Chen still received 73,433 votes against the recall, and his party has ‘grown up’ through the process, he said

A total of 77,899 votes were cast to recall Chen, while 73,433 voted against, the Taichung City Election Commission said, adding that 51.72 percent of the city’s second electoral district turned out.

The Central Election Commission is to confirm the final figures within the next seven days, it said.

Under the Civil Servants Election and Recall Act （公職人員選舉罷免法）, 25 percent of eligible voters — 73,744 for the second district — must vote in favor of a recall to meet a threshold for an election to be valid.

A by-election is to be held within three months to fill the legislative seat, the commission said.

After the outcome was announced, Chen thanked supporters gathered at his Taichung campaign headquarters, where he led other Taiwan Statebuilding Party officials and staff in a bow.

Chen said that it was not a total defeat, as “I had won last time, and had gained the working experience as a legislator for one year and nine months. Through this recall campaign, our party has also grown up. We are a small party, and it was hard to mobilize initially. Now our party has matured.”

Referring to the 73,433 votes against the recall, Chen said that “we did not lose this battle,” as that number was quite close to the threshold.

“It means that through the past year and nine months that I served in the legislature, we gained the support of 73,433 local residents who identify with and approve of my work,” he said.

“Despite the result, our party has not been knocked out, and we will work hard to safeguard Taiwan’s democracy,” he said.

Yang Wen-yuan （楊文元）, who initiated the recall election, claimed he voted for Chen Po-wei in January last year, but later regretted it.

“This is the most glorious moment for Taichung’s second electoral district,” Yang said. “It shows that Taiwan’s democracy has made progress, and it also serves as a warning to all elected politicians not to forget their pledges to voters.”

KMT Chairman Eric Chu （朱立倫） said that Chen Po-wei’s support for lifting an import ban on pork containing ractopamine was among the reasons voters sought “to oust an arrogant legislator.”