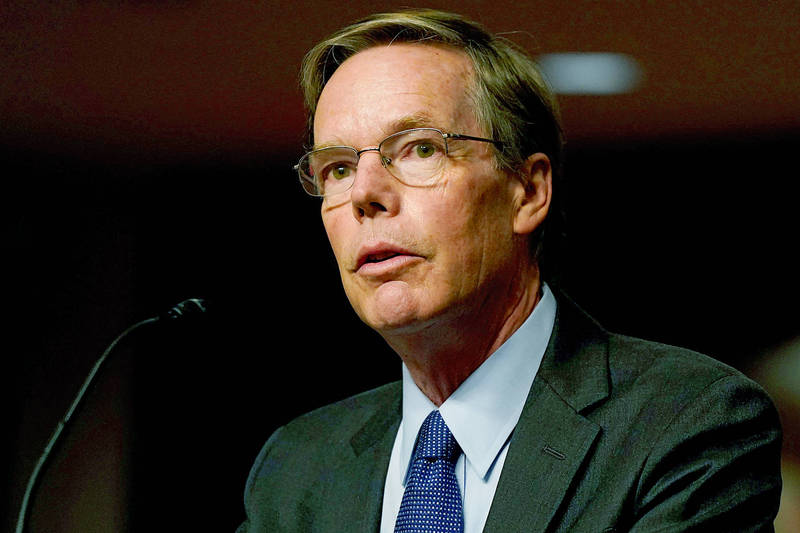 US diplomat Nicholas Burns, US President Joe Biden’s nominee for ambassador to China, speaks at his US Senate confirmation hearing on Capitol Hill in Washington on Wednesday. Photo: Reuters

SKEPTICAL: Long-time US diplomat Nicholas Burns said that China has been the ‘aggressor’ in its relationship with Taiwan, Vietnam, Japan and the Philippines

US President Joe Biden’s pick to be ambassador to China drew sharp lines with Beijing over its “aggressive” actions in the Indo-Pacific region, but said that “American strength” gives the US key advantages in the relationship between the world’s two largest economies.

Nicholas Burns, a long-time diplomat who previously served as US ambassador to NATO and Greece, said that China has been the “aggressor” in its relationship with Taiwan, Vietnam, Japan and the Philippines.

He also said that he is skeptical about Chinese intentions on issues such as 5G technology, but he emphasized his view that the US has the upper hand.

“Beijing proclaims that the East is rising and the West is in decline,” Burns said. “I’m confident in our own country. The People’s Republic of China is not an Olympian power.”

Burns singled out China’s frequent incursions of Taiwan’s air defense identification zone as particularly egregious, saying it is clear that “they intend to take back Taiwan” and that the US needs to redouble efforts to prevent that from happening.

“Our responsibility is to make Taiwan a tough nut to crack,” Burns said, while dismissing a suggestion that the US ditch its policy of “strategic ambiguity.”

“We’re better off, and we’ll be more effective, in staying with the one China policy of the last four decades,” he said, without clarifying its position on Taiwan’s sovereignty.

In Taipei yesterday, the Ministry of Foreign Affairs thanked the Biden administration for reiterating the US’ commitment to Taiwan.

Many countries, including the US, have become increasingly alarmed by Beijing’s belligerence, Ou said, referring to what Burns had said at his confirmation hearing: “We certainly cannot trust the Chinese.”

Taiwan would continue to bolster its self-defense capabilities and safeguard its democracy, she added.

At a news briefing in Beijing, Chinese Ministry of Foreign Affairs spokesman Wang Wenbin （汪文斌） said that Burns’ remarks were “full of Cold War mentality,” urging him to “understand China in an objective manner” and not underestimate its determination to uphold its “legitimate rights.”

While Burns, 65, mentioned the importance of staying engaged with Beijing and finding common interests, his focus on areas of conflict won quick praise from US Republicans and Democrats on the committee as the hearing got under way.

The job of envoy to China “really demands a bipartisan approach,” said US Senator James Risch, the top Republican on the panel.

“You will be on the front lines of this competition,” Risch said.

Burns singled out the US’ network of alliances as one of the biggest advantages that it has when it comes to competing with China, which he said has few friends or allies to rely on.

In a rare aside for a Democrat in Washington, Burns even praised former US president Donald Trump and former US secretary of state Mike Pompeo for “reinvigorating” the Quad alliance with India, Japan and Australia, saying that it was an important bloc for the US in the Indo-Pacific region.

He currently serves as a professor at Harvard Kennedy School.