《TAIPEI TIMES》 EU to ‘work with Taiwan’ despite China 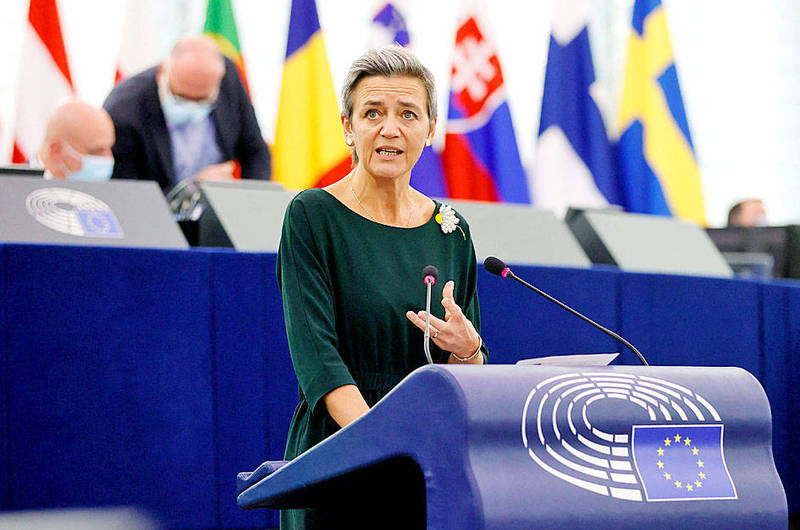 EU Commissioner for Competition Margrethe Vestager speaks during a debate at the European Parliament in Strasbourg, France, on Tuesday. Photo: AFP

ANTI-COERCION: EU Commissioner for Competition Margrethe Vestager said the EU wishes to bolster relations with Taiwan within the framework of its ‘one China’ policy

The EU is to further its engagement with Taiwan to defend democracy, freedom and an open market, while bolstering cooperation in semiconductor supply chains, EU Commissioner for Competition Margrethe Vestager said on Tuesday.

In her remarks at a European Parliament plenary session focused on Taiwan-EU relations, Vestager referred to China’s increasing military presence in the Taiwan Strait, including flying missions off the southwest coast of Taiwan.

“This display of force may have a direct impact on European security and prosperity,” she said, adding that the EU encourages all parties to avoid any unilateral actions that might increase tensions across the Strait.

“We Europeans — we have an interest in preserving the status quo in the Taiwan Strait ... and we will continue voicing our concerns in our contact with China and publicly, and step up coordination with like-minded partners such as the G7,” Vestager said.

The EU wishes to enhance relations and cooperation with Taiwan within the framework of its “one China” policy, while strengthening their people-to-people ties, she said.

Exchanges between the two sides have also been expanded in that past few years to include human rights, trade and economic issues, she said.

“While enhancing ties with Taiwan, the EU also has to address China’s assertiveness and attempts to intimidate Taiwan’s like-minded partners,” Vestager said.

The EU is evaluating how to better tackle challenges posed to its supply chains and consolidate its relations with partners in strategic sectors, such as semiconductors, she added.

The EU hopes that Taiwan will become an important partner to help it realize the “European chips act,” she said.

The chips act, proposed last month by the European Commission, covers research and production capacity, prompted by a chip shortage that has disrupted the auto industry, medical device makers and telecoms.

The EU relies on Asian-made chips and it has a diminished share in the supply chain, from design to manufacturing capacity.

Vestager also referred to the Lithuania-China rift that occurred after the Baltic nation pledged to bolster ties with Taiwan, saying that “Lithuania and all member states find themselves coerced for taking decisions that China finds offensive.”

The Chinese Ministry of Foreign Affairs asked Lithuania to withdraw its ambassador from Beijing, while recalling its envoy from Vilnius in August, after the Baltic country allowed Taiwan to establish a representative office there.

What particularly irked Beijing was Lithuania allowing the office to use the name “Taiwanese Representative Office” rather than the standard “Taipei” office, because of its implication that Taiwan is a sovereign country.

Calling for solidarity in the bloc, Vestager said the EU would “continue to push back these attempts and adopt appropriate tools, such as the anti-coercion instrument currently under preparation,” to respond to similar situations.

At Tuesday’s session in Strasburg, France, members of the European Parliament debated a report on Taiwan-EU political relations and cooperation, which was last month approved 60-4 with six abstentions by the parliament’s Foreign Affairs Committee.

A parliamentary vote on the report was to take place yesterday.

Vestager welcomed the “timely report,” saying that it “conveyed a sense of urgency we need to foster our engagement to make sure that Taiwan preserves its democracy, freedom and open market.”

In Taipei, the Ministry of Foreign Affairs warmly welcomed Vestager’s remarks, saying that her stance represents the EU’s “unprecedentedly strong support” for Taiwan.

The ministry was glad to see Vestager voice support for the report, ministry spokeswoman Joanne Ou （歐江安） said in a statement, expressing the hope that the report would be passed smoothly.

Taiwan — as a like-minded partner with the EU on democracy, freedom, human rights and the rule of law — would deepen its mutually beneficial and practical partnership with the bloc in a bid to defend peace, stability and prosperity in the Taiwan Strait, Ou said.